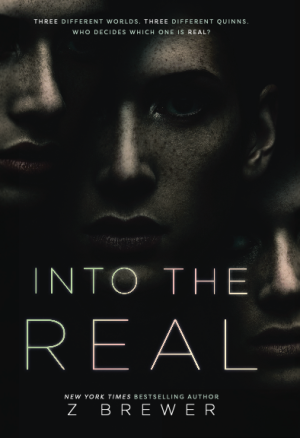 The first Brume is a waking nightmare, overrun by literal monsters and cutthroat survivors. For Quinn, who is openly genderqueer, the only silver lining is their friendship with Lia—and the hope that there might still be a safe place somewhere else in the world.

The second Brume is a prison with no bars. Forced to “sort out” their sexuality with other teens at Camp Redemption, Quinn must also figure out why presenting as female has never felt quite right.

The third Brume is a warzone. For Quinn, who presents as male, leading the Resistance against an authoritarian government is hard, since even the Resistance might not accept them if they knew Quinn’s truth.

As Quinn starts to realize that they might be one person alternating among these three worlds and identities, they wonder: Which world is the real one? Or do they all contain some deeper truth?

You can’t run from the monster. The monster is you.

Three stories about Quinn. Three different Quinns. How do they all fit together? Or do they?- Kinzie Things

My thoughts bit: I’m new to books by Z Brewer, which is strange because they seem to have contributed quite a bit to the writing world! Anyway, this is my first and I would definitely look into others!

Into The Real by Z Brewer is quite a unique novel. Quinn is the main character… in three different stories. Z Brewer has created, what is essentially, three novels that merge into one … “connection” by the end. There will be no spoilers here so don’t expect me to reveal what happens in this book.

The first storyline that the reader is introduced to is one in which monsters are very much a reality. Genderqueer Quinn is on the run with a friend, Lia, and interloper Caleb. Their town is now surrounded by a dense fog that turns them around each time they try to leave the town. It’s a disturbing thought and this is one scary world. The creatures are of nightmarish quality, screamers, unseen hands… it’s all very disturbing.

In another storyline, Quinn has been banished from the family and sent to a conversion camp. The same cast of supporting characters appears in this world but their challenges and allegiances are quite different. This camp is a horrendous place. Quinn is subjected to therapy that is designed to guide her from her girlfriend, Lia, and instill in her very right-wing, religious attitudes about homosexuality and gender. There is physical abuse, mental and emotional abuse. Another world…with different kinds of monsters.

I was extremely uncomfortable with the way in which a trans character was treated at the camp. The character is dead named repeatedly and told that they are an abomination etc. While this is corrected by the other supporting characters it is my understanding that reading about deadnaming can be really triggering for some readers. I do feel there is a way to write about a situation in which deadnaming occurs, without actually using a character’s deadname. (See Surrender Your Sons by Adam Sass.) I would urge you to read the warnings for this book.

In the third storyline, Quinn is the commander of an underground resistance. They are locked in battle and also… locked into their gender roles. In this storyline, Quinn appears to be male and struggling with the fact that he is gay. He can’t reveal his sexual orientation even to his closest companions. Women aren’t allowed on the front lines in this storyline and even though Quinn finds he disagrees with that, he doesn’t stand up to the ruling. Again, the same cast of supporting characters appears, again in different roles and fighting different monsters.

By the time all three storylines are introduced, it’s clear that there’s something strange going on for Quinn. There are hints that things are bleeding between the storylines. The same person begins to appear, words linger in Quinn’s mind and each Quinn starts to feel oddly unsettled.

The idea behind this novel is intriguing. I was most interested in the first story that was introduced. Brume has become a town imperiled. Quinn is struggling to stay alive, fighting real monsters and protecting their friends. There was something really engaging about the first world. The conversion camp storyline was less engaging… perhaps because it’s a common theme recently. The third storyline seemed a bit forced compared to the other two. Soldier Quinn was the character that I connected with the least. In spite of these differences, I feel as though each story could have been a novel in its own right.

This book is well-written and the storylines are significantly different so it’s easy to keep the stories separate in your mind… that is until they begin to merge.

Things You May Want To Know: Please be aware, I’m by no means an expert on what may or may not have the potential to disturb people. I simply list things that I think a reader might want to be aware of. In this book: (SPOILERS) Vivid descriptions of battles/fighting/killing, frightening monsters/creatures, depictions of conversion therapy, physical punishment, homophobic language and behavior, religious zealots,  forced confinement, descriptions of blood and injuries, death of supporting characters, descriptions of death/killing, deadnaming of a transgender character.

I received an ARC of Into The Real by Z Brewer from Quill Tree Books via Edelweiss in exchange for an unbiased review.