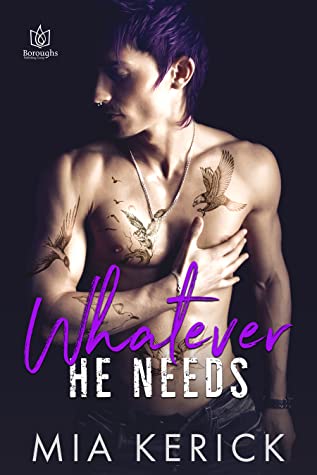 Nightclub dancer, Dimmy Cirillo, is living a nightmare. He doesn’t want to be the boy-toy his father is pimping him out to be, but he has no way out.

Construction-company heir, Liam McAllister, wasn’t looking to become anyone’s white knight, but he couldn’t stop himself from helping the willowy, tattooed man who takes his breath away. But Liam isn’t out, and he won’t tell his father – the repercussions would be disastrous. His only truth is found in Dimmy’s love.

If Liam waits too long to be the man he knows he should be, he risks losing Dimmy. Worse, Dimmy might fall back into his father’s clutches.

Both men have to face standing up for themselves and for their love. It’s the fight of their lives, and they have to win.

I feel like my heart has been through the ringer (and I loved it). This is a beautiful story about finding your wings and being free enough to love. – Kinzie Things

Liam McAllister comes from a well-to-do business family. He wears all the best clothes, stays at “The Cottage” which is actually more like a mansion, and is so far in the closet he can’t see the light of day. Things begin to get complicated for him when Liam sees a dancer at a local gay club.

Gorgeous, tattoo-covered, purple-haired… Dimmy is dancing at a club. He doesn’t dance because he wants to, he dances because he is locked into a ridiculously unhealthy and abusive relationship with his father. Left alone with his father, Dimmy was forced to “earn his keep” by working in his father’s club. The problem is that as Dimmy got older, he was forced closer and closer to sex work.

Mia Kerick has a very emotional and visceral writing style, and this book is no exception. Liam and Dimmy are both facing immense challenges, not the least of which is how they may or may not “fit” together.

This book is an exploration of the feeling of “need” and what that really means in someone’s life. She delves into the way that what we are subjected to can far too easily become what we think we need. The power imbalance that exists between. Dimmy and his father are so well written that I often found myself with tears in my eyes. And the remarkable thing that Kerick captures is the way that Dimmy moves from one controlling relationship to another because he’s been so conditioned to believe he isn’t the master of his own life.

Dimmy is an extremely well-written character. The descriptions of him are beautiful and heart-wrenching at the same time. He is an extraordinary man who is trapped in a life that is threatening to completely erase his sense of self. I loved the way that Dimmy struggled to be himself by covering his body in tattoos of birds in flight, by dying his hair vivid colors. He is a wounded and broken person, but he knows that he needs to escape. He will stick with me for a long time to come.

Liam is equally as interesting even though he is trapped in a completely different way. There are expectations in Liam’s life… marry a lovely socialite, produce grandchildren, and be successful. Liam has known most of his life that he is gay, but he has remained silent, believing that he won’t be accepted by his friends and family. As he falls in love with Dimmy, he struggles to be what he thinks Dimmy needs while at the same time keeping his true self from his family. I’ve met people like Liam, and it broke my heart to read it so clearly written. He is, in many ways, more lost than Dimmy.

The supporting characters in this book are remarkable. They are quirky, loving, original, and sometimes funny. They are a found family waiting to be seen, but both men are struggling too much at times to even know this support system is there for them.

This book isn’t always easy to read. Dimmy is subjected to some horrible things because of his father. What I liked was that Mia Kerick handled these situations delicately and gently. While it’s difficult to read the aftermath of what Dimmy had to survive, Kerick doesn’t give the reader a play-by-play of what goes on. The subtle impact of Kerick’s writing wasn’t lost on me.

Things You May Want To Know: Please be aware, I’m by no means an expert on what may or may not have the potential to disturb people. I simply list things that I think a reader might want to be aware of. In this book: (SPOILERS) power imbalance with a parent, power imbalance in a relationship, parent physically abuses son, a character is forced into sex trade work, a character is physically assaulted, a character is kidnapped and held captive, very emotional scenes with respect to recovering from sexual assault, a character is very hurtful while trying to keep his sexuality from his family.

I received an ARC of Whatever He Needs by Mia Kerick from The Author in exchange for an unbiased review.

One thought on “REVIEW: Whatever He Needs by Mia Kerick”