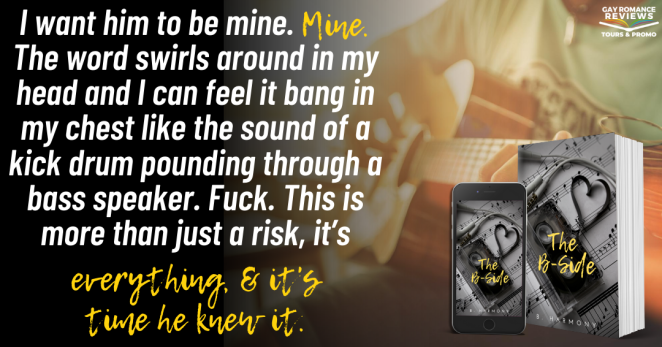 The Official Description: Chance: When I read the roommate wanted ad, I thought my sister was encouraging me to live with a 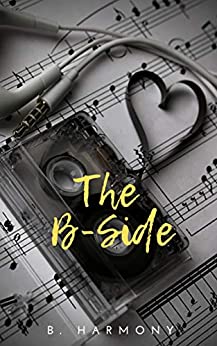 n insane person. As it turns out, he isn’t insane, he’s sexy and one hundred percent my type. Living with him will be the ultimate test of my self-control.
When the combination of our love of music and my overwhelming need to take care of him meets jealousy, sparks fly. His heart may be damaged, but nothing is beyond repair.
Now all I have to do is convince him that I’m in this for the long haul, not just this moment.

Tyler: I may look like the happy-go-lucky gay guy with a big smile and more punny tees than one person should probably own. But it’s just a shield to protect my heart, the one that has been torn apart by the people who were meant to love me most. The last thing I’m willing to do is risk the tattered shreds on my new – straight- roommate. Sure, he’s sexy as sin and has a love of music that rivals my own, but all that is just grounds for a new friendship. Nothing more. Right?
Yet, every moment we spend together tests a little bit more of my self-control. When it turns out my roommate is not as straight as I once thought, I have to decide if this is one playlist I should listen to.
Will we have our own love song, or will this just be another broken-hearted ballad?

The B-Side is a low-angst, roommates-to-lovers, MM Romance novel. Featuring punny t-shirts for every occasion, killer playlists, meddling family and friends, and a happily-ever-after.

A light story of love between roommates who try to resist it.- Kinzie Things

My thoughts bit: The B-side is my introduction to B. Harmony. This book is a gay romance novel about two men who end up roommates after a quirky Craigslist ad brings them together.

The novel begins with Chance finding out that his landlords want him to move out because they’ve found someone who will pay more rent. He’s just come out as bisexual and his sister finds a cute and quirky ad for a roommate! The fellow who ran the ad is gay and sounds great and Chance’s sister thinks that it will be a great way for him to get acquainted with the LGBTQIA community.

Tyler wrote his funny ad in a weak moment. He’s tired of having roommates that don’t work out… his most recent was a guy he got along with great until the guy discovered that Tyler was gay and went on a homophobic tirade. How he missed that Tyler was gay is anyone’s guess as nearly every t-shirt he owns has a gay saying on it.

When Tyler and Chance meet… they both realize they are definitely each others’ type. The thing is, Tyler doesn’t know that Chance is gay and Chance doesn’t think that they should get involved if they are roommates. There’s nothing particularly original about this concept, but this is an entertaining version of the trope.

Tyler is a lovely character. I particularly enjoyed how he was unapologetically himself. The t-shirts that he wore were as varied and amusing as his reactions to having Chance in his life. It was fun reading along with him as he got to know Chance and began to come out from behind the protections he had built up throughout his life.

You’ll get your HFN in this one, so don’t worry about that. If you’re a fan of the genre and this trope, in particular, I’m sure you’ll enjoy this book!

Things You May Want To Know: Please be aware, I’m by no means an expert on what may or may not have the potential to disturb people. I simply list things that I think a reader might want to be aware of. In this book: (SPOILERS) discrimination against a person who is bisexual, homophobic parents, homophobia, mentions the death of a close family member, description of a car accident, a character is in a coma, a character has a severe migraine, character vomits.

I received an ARC of The B-Side by B. Harmony from Gay Romance Reviews in exchange for an unbiased review.