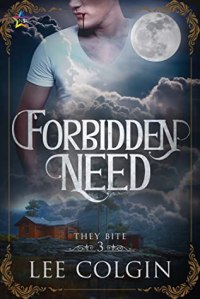 The Official Description: As Rudy adapts to life in a new town, he lays eyes on a man whose very presence steals his heart. The man is bewitching. Bewitching…and grumpy.

Samuel has no interest in the coyote shifter who’s been following him around like a lovesick pup, even if he is adorable. Adorable…and persistent.

Born a vampire before the Great Wars, Samuel’s had plenty of time to make enemies. If he can’t discover and kill the one who’s been stalking him, it could be Rudy who pays the price. Samuel doesn’t do relationships, and he won’t bend the rules for Rudy, but that doesn’t mean he wants the coyote hurt. Stuck together as Samuel plots revenge, Rudy finally has his chance to win over his mate.

Can they harness the power of their fated bond, or will Samuel’s dark past overcome the future they’ve yet to claim?

My thoughts bit:   This is book three in the “They bite” series. Full disclosure – I loved the supporting character, Samuel in the last book so I was delighted when I discovered he was one of the main characters in Forbidden Need. When I first encountered Samuel I described him as  “all sharp edges and pointy bits.” I’m happy to say he is still the same in this third book of such a great series.

Colgin’s world is one that I quite enjoy. Vampires can be born or sired. There has been some political strife between shifters and vampires that has resulted in some hard feelings and some violence. There can be interspecies “mates” but the idea of fated mates is one that is more fully explored in this book.

When young Coyote shifter Rudy sees Samuel he knows there’s something special about him. It doesn’t take Rudy long to work out that Samuel could be his mate. He doesn’t know much about fated mates, but his heart is open and loving and he just wants to be near Samuel.

Gruff and sharp Samuel is true to form in this book. He’s built up walls that allow him to maintain an emotional distance from the people around him. His best friend is probably Benjamin who is the main character in book two. In fact, it’s Samuel who encourages Ben to take on his werewolf partner, Nathan. If only Samuel would easily apply that same advice to himself.

Through brief flashbacks of the past, Colgin reveals what has happened to Samuel since he was born. Soon, the reader finds out that Samuel has fought hard to be the person he is. There is a lot of trauma and violence in his past, and he has learned to protect himself by shutting himself off from relationships. Samuel is a lovely and complex character. Despite his thorny outside, I already liked him because of his brief presence in the second book of the series. The flashbacks combined with his reluctant interest in Rudy made me like him even more.

Rudy is the more loveable of the two characters. The shifters in Colgin’s books tend more toward being free-spirited and a bit less bound by tradition than they are their hearts. I like that as it makes sense to me. It’s clear that the author has put a lot of thought into the world and the characters because it’s very consistent throughout the series.

This is probably my favorite book so far in this series!

Things You May Want To Know: Please be aware, I’m by no means an expert on what may or may not have the potential to disturb people. I simply list things that I think a reader might want to be aware of. In this book: (SPOILERS) flashback to a sexual assault, off-page domestic physical and emotional abuse, death of a loved one, death of a sibling, death due to car accident, flashback to a car accident, graphic violence, stalking, torture in the past.

my review of book one: Forbidden Bond

I received an ARC of Forbidden Love by Lee Colgin from NineStar Press via Netgalley in exchange for an unbiased review.