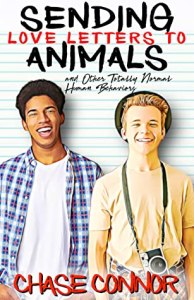 Ryan Offsteader had one major problem, but now that he’s out of the closet and no one in his family or school actually cares, his problems are few. Life is a cycle of family, school, homework, Journalism Club, his friends, hanging out, and waiting for life to begin. It’s a simple, boring life at times, but his problems are few.

When Ms. Tabatabai, his English teacher and Journalism Club mentor, announces to the class that there will be a project where students pair up, Ryan and his best friend, Jules, assume they will work together. Ms. Tabatabai has other plans. Students will be paired off randomly. Ryan is left without a partner since his English class has an odd number of students. However, Ms. Tabatabai assures him that he will have a partner since a new student is enrolling. It’s not an ideal situation for Ryan since he is used to working with Jules on every project, but it’s not the worst.

Until the new student shows up and Ryan realizes this isn’t their first time meeting.

Ms. Tabatabai announces to the students that they are to get to know each other and write a paper about their partner. An oral report in front of the class will be expected once the project deadline arrives. There’s just one caveat—the pairs must get to know each other without speaking. How they do this is up to them. Points will be given for creativity.

Ryan’s partner does everything he can to make the project impossible, Ms. Tabatabai assigns Ryan to a new project in Journalism Club, his friends want to occupy all of his time, and, if all that wasn’t enough, he’s tasked with helping the Drama teacher, Mr. Melvin, organize the spring singing recital, A Night on Broadway.

Unless Ryan can confront his history and right a wrong, his whole world could fall apart. Will he choose to confront his past, or will history repeat itself?

It’s official, I have fallen in love with this book. It’s exactly the kind of queer story that I enjoy. It’s an authentic story in which the characters happen to be diverse. There’s no tragedy… no great drama – other than the adorable kind between friends.

I have to say that this story really spoke to the side of me that loves a good old, fun, romantic 80s movie. Pretty in Pink, Some Kind of Wonderful… the Breakfast Club! Connor has captured the best of the good feelings from those movies and given it a modern twist.

This is a contemporary story set in a small high school. Ryan Offsteader loves musicals even though he can’t sing, has great friends, loves his bestie Davud and is happy with his life. Oh yeah, he happens to be out and proud… and really, is just living a good life. Isn’t that refreshing?

Everything is going well until Ryan’s English teacher assigns him the new kid as a partner for an unusual project. He must get to know the new kid… without talking to him. This isn’t difficult, because the new kid won’t talk to him. There’s a lot to unpack there… things aren’t always what they seem. Ryan has some history with the new kid that he hasn’t had a chance to work out. I’m not giving it away as I loved the way the story unwound in this book.

The pacing in this short novel is wonderful. I was engaged from the beginning and there’s a surprising amount of character development despite the short length. Take a chance on this one, you’re going to love it.

Things You May Want To Know: Please be aware, I’m by no means an expert on what may or may not have the potential to disturb people. I simply list things that I think a reader might want to be aware of. In this book: (SPOILERS) ghosting in the past (which was kind of mutual)

I received an ARC of Sending Love Letter to Animals And Other Totally Normal Human Behaviors by Chase Connor from The Lion Fish Press via The author’s street team in exchange for an unbiased review.