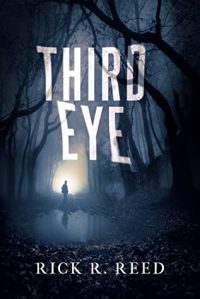 The Official Description: Who knew that a summer thunderstorm and a lost little boy would conspire to change single dad Cayce D’Amico’s life in an instant? With Luke missing, Cayce ventures into the woods near their house to find his son, only to have lightning strike a tree near him, sending a branch down on his head. When he awakens the next day in the hospital, he discovers he has been blessed or cursed—he isn’t sure which—with psychic ability. Along with unfathomable glimpses into the lives of those around him, he’s getting visions of a missing teenage girl.

When a second girl disappears soon after the first, Cayce realizes his visions are leading him to their grisly fates. Cayce wants to help, but no one believes him. The police are suspicious. The press wants to exploit him. And the girls’ parents have mixed feelings about the young man with the “third eye.”

Cayce turns to local reporter Dave Newton and, while searching for clues to the string of disappearances and possible murders, a spark ignites between them. Little do they know that nearby, another couple—dark and murderous—are plotting more crimes and wondering how to silence the man who knows too much about them.

A dramatic story with real bite! Not for the faint of heart! – Kinzie Things

My thoughts bit:  Cayce is living in a small town with his 7-year-old son Luke. They have a pretty simple life until one night during a storm Cayce is injured. After a serious head wound, he awakens with strange visions in his head that relate to some young girls who are missing from the town. It all begins when he reads a newspaper that has an article written by a local reporter, Dave. Almost instantly Cayce believes that one of the missing girls is dead.

After struggling to come to terms with what he is seeing in his mind’s eye, Cayce talks to the police. He is dismissed out of turn by the law so he approaches one of the missing girl’s families. He is thrown out. He turns to Dave eventually because that’s the only place he has found any support and belief in his visions.

When Cayce assists the second mother of a missing girl to find her daughter – finds and digs up a dead body 0 things get really complicated and frightening. The police now want to know how Cayce knew where the body was buried. Dave reappears at the right time and listens to Cayce’s entire story. Then the worst happens… and the killers take Luke. With his son missing, Cayce’s life begins to get completely overwhelming and he leans on Dave for help.

The killers in the book are disturbing and unsympathetic. I found it difficult to care about “Myra” at all. In an interesting note for me, the killers are named Myra and Ian and the names are those of infamous serial killer Myra Hindley and Ian Brady. Of note, in reality, Myra was the dominant partner in the killing relationship and these roles are swapped in the book. Want an extra interesting note? My mom was a police officer in England and actually met Myra Hindley. True story.

The story switching POVs occasionally – to the victims rarely, to the perpetrators of the crime more often. It’s interesting to dip into the world of different characters as this story unfurls. I had a lot of trouble feeling any sympathy for “Myra” in this story. In fact, I was angry with her most of the time – more so than the dominant killer! But, I will credit Rick with making me angry! It takes just as much skill in writing to have a reader disliking a character as it does to have them love a character!

The fear and terror of losing a child was captured really well in this novel. I can’t begin to imagine what it must be like, but there are a few different examples in this story of the variety of ways that people react to such a tragedy. It’s interesting to see the differences between all the characters as this story progresses.

Please read the trigger warnings for this one! 😀

Things You May Want To Know: Please be aware, I’m by no means an expert on what may or may not have the potential to disturb people. I simply list things that I think a reader might want to be aware of. In this book: (SPOILERS) descriptions of kidnapping, descriptions of forced confinement, depictions of rape, murder, violence, abduction of children, head injury resulting in amnesia, description on bloody head injury, domestic emotional/physical/sexual abuse, child sexual abuse implied and confirmed (Off-page).

I received an ARC of Third Eye by Rick R. Reed from NineStar Press via NetGalley in exchange for an unbiased review.