There’s a new installment in the Rainbow Place series coming on March 18!! Follow along as I read and review the first five books in the series! 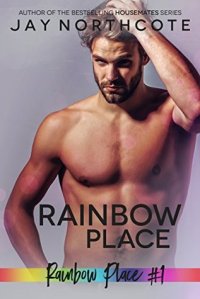 Official description: Can Jason find the courage he needs to be the man Seb deserves?

When Seb Radcliffe relocates to a seaside town in Cornwall, he feels like a fish out of water. He misses queer spaces and the sense of community he enjoyed when he was living in the city, and decides to open an LGBT-friendly cafe-bar.

Jason Dunn is the builder Seb hires to help renovate the rundown space where the cafe will be housed. Jason is also gay, but unlike Seb, he’s deep in the closet. He’s never had a relationship with another man–only allowing himself the occasional hook up with guys who are prepared to be discreet.

The attraction between the two men is instant and impossible to ignore. But while Seb is out and proud, Jason is terrified of being exposed. With the grand opening of Rainbow Place approaching, tension is growing among some locals who object to Seb’s plans. When things escalate, Jason is forced to choose whether to hide in the shadows and let Seb down, or to openly support the man he’s fallen so hard for.

Although this book is part of a series, it has a satisfying happy ending and can be read as a standalone.

My thoughts: I really enjoyed the first book in this series! In addition to having some really hot chemistry between the two main characters, this book has a clear message of support to the LGBTQ community.

When Seb moves away from London, he’s moved away from the familiar. He finds himself in a town where it’s not as easy to be “out” without there being consequences. He and his friends come up with the idea for him to renovate his cafe and make it an LGBTQ friendly space. What could go wrong?

A couple of things happen when Seb begins his renovations. Jason is hired to complete the work. Jason has been living a discreet life as a gay man after an amicable split from his wife. He’s not “in the closet”, he’s just not out of it.. which is the same thing, right? It’s a small town. He has to protect himself.

Of course, the two men are attracted to one another but the fact that Seb has always been out and Jason is needing to be discreet becomes a problem. Let’s face it, the two men are just at two different places in their lives. While that doesn’t stop them from having piping hot chemistry, it does make Seb question what he’s doing. Is it smart to get involved with someone who is still coming to terms with their sexuality? Probably not.

Jay Northcote does a great job of depicting both sides of the issue. I get it, I was raised in a small town and your business is everyone’s business. There is also a flip side to that though. Seb is doing something really good for the community and  if he can’t count on Jason for the support he needs it leaves him feeling realy alone in spite of his friends and community,

There are some lovely moments of community and support in the face of homophobia. It was lovely to read about a found family of people coming together to get things done! I loved the supporting characters and I am excited that I’m going to learn more about some of them in the upcoming books!

I received an ARCs of The Rainbow Place series by Jay Northcote via Signal Boost Promotions in exchange for an unbiased reviews.