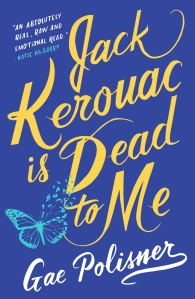 The Official Description: Fifteen-year-old JL Markham’s life used to be filled with carnival nights and hot summer days spent giggling with her forever best friend Aubrey about their families and boys. Together, they were unstoppable. But they aren’t the friends they once were.

With JL’s father gone on long term business, and her mother suffering from dissociative disorder, JL takes solace in the in the tropical butterflies she raises, and in her new, older boyfriend, Max Gordon. Max may be rough on the outside, but he has the soul of a poet (something Aubrey will never understand). Only, Max is about to graduate, and he’s going to hit the road – with or without JL.

JL can’t bear being left behind again. But what if devoting herself to Max not only means betraying her parents, but permanently losing the love of her best friend? What becomes of loyalty, when no one is loyal to you?

A story about trying to grow up when things seems to be falling apart around you. – Kinzie Things

My thoughts bit: This is a tough one for me. Now, first of all, this is a Young Adult book – so I’m not the intended audience. Second – my review seems to be the opposite of what most people think. So there you go! continue reading if you’re curious.

This book is about J.L. She’s fifteen and dating a 19-year-old. Her father has taken a job in another city and has been gone for an extremely long time (and apparently doesn’t even come home for visits). Once JL’s father left… her mother sank into a depression and is dealing with a dissociative disorder. Her best friend Aubrey seems to have moved on to greener pastures… and JL is left trying to figure out what she wants to do.

The good thing… is that this book is well-written. I enjoyed the fact that the POV changed from the present to the past. Some things about JL and Aubrey’s friendship were revealed through the flashbacks.

Things began to fall apart for me about the middle of the book. I’m afraid it just wasn’t believable for me. I mean, what father goes away to work for a year plus and never comes home to visit? Doesn’t ever concern himself with what’s happening to his daughter? None of the adults in this book behave … normally. (And I’m not talking about the mental illness.) JL’s grandmother just says, “things will be better when your father comes home.” It’s revealed late in the book that Aubrey’s parents have discouraged her from spending time with JL because of her mother’s behavior/illness.

The relationship between JL and Max was basically filtered down to: will they or won’t they have sex. There was very little characterization of Max and it was difficult to understand what was going on between the two of them. For me, there were pieces of the puzzle missing in the middle of the story. Why exactly did Max and JL get together? It seemed as though people were judging JL based on the fact that she was spending time with a fellow who was held back a grade … and was different.

I don’t know, maybe I was looking for too much from this story. Many of the other reviews I read said that people really loved it, felt it was very authentic and raw. I didn’t get that feeling… but again – not the target audience. I read a lot of YA books and I really make an effort to not review as if I’m the intended audience. I focus on the content. The content in this story just didn’t live up to what I would expect in a story about a young woman coming of age.

For me, the final nail in the coffin was the implication that JL’s mother slept with her 19-year-old boyfriend, and then in the epilogue, the family was back together again. I literally stopped reading and thought, “did I miss something?”

Don’t get me wrong, I know that people can be really rotten to one another and that they can make very poor decisions for a wide variety of reasons, but really… there was far too much of that going on in this novel for me.

Things You May Want To Know: Please be aware, I’m by no means an expert on what may or may not have the potential to disturb people. I simply list things that I think a reader might want to be aware of. In this book: (SPOILERS) Underage sexual activity, death of butterflies that are in captivity, absent parent, descriptions of a parent with mental health issues, parent has sex with daughter’s boyfriend.

I received an ARC of Jack Kerouac is Dead to Me by Gae Polisner from Wednesday Books via NetGalley in exchange for an unbiased review.