Book Title: Ted of the d’Urbervilles

Love is Love—though who they will find it with remains a mystery until the very end!

Ted is an orphan, a young gay man living on the streets following the death of both his parents. Hope seems futile, though hope is exactly what he finds when a surprising email informs him that an unknown wealthy relative has died, that a reading of a will is soon to occur clear across the country. Ted will inherit something, but what that something is remains to be seen.

Benny is a young, homeless drug addict, straight except for when cash is involved. Benny has never had a reason to be hopeful about anything until a chance encounter with Ted.

Both men are soon traveling together from state to state, making ends meet however they can, rushing to the reading of the will that may or may not change both their lives forever. An unexpected friendship quickly forms, and then just as unexpectedly blossoms into something more as their adventure ultimately leads them to their fates.

I found myself in a tangle of trains. Not passenger trains, but the kind that carries stuff. Coal, lumber, crates. No train cars. Nothing I could hop into so much as on. I wasn’t counting on this. I thought I’d slide open a door and bum a ride. But a ride to where? Even if I could hop on, where would I wind up? I clearly hadn’t given it enough thought. To be fair, my head was full of Chuck at the time, a peg missing its hole. It was, as analogies went, a fine one.

I needed to travel east. East I could figure out. East was away from the Rockies. But all the trains were parked. Which way were they headed once they left? And what if I hopped on and the train never stopped until its destination? What if we started east and then headed south?

I sat on the track. My salvation was somewhere in front of me. Eeny, meeny, miny, which one would the mo choose?

I jumped. I fell backward. I stared up, shielding my face with my hand. A guy stood there staring down at me. He was on the dirty side, young, like me, gaunt, shorter by a foot. I’d seen men like this around San Francisco. I avoided men like this. You wound up homeless for a lot of reasons. You also stayed homeless for a lot of reasons. This guy either started or wound up that way because of drugs. His hand twitched. His right eye did the same. Manic would’ve been a good word for it. Or a bad one.

“Just looking,” I said as I righted my butt back on the tracks. “I like trains.”

I turned away from him. I hoped he’d take the hint. Sadly, he sat down next to me instead.

“You can’t hop them,” he said. “They check. They’re watching you right now even.” He pointed up to a lamppost. I could see the camera. It didn’t matter; there was nothing to hop into. And even if I could make it on top of a car, it would be crazy dangerous. And windy. And cold. Not an adventure so much as an ordeal. “Benny,” he said, holding out a hand. He had long nails. Dirty nails. His current state had always been a possible future for me. I seemed to always be running from it. But in which direction, away or towards?

I didn’t shake his hand. I nodded his way instead. “Ted.”

He put his hand by his side. He frowned. I felt bad. I was homeless. He was homeless. It wasn’t a bond so much as a prison sentence we shared. “Where you headed?” he repeated.

“That’s where I started.”

My heart pulsed. If he started from there, he knew which way to head. I pointed in front of me. “Which one goes that way?”

His grin returned. His teeth were in need of a brushing. He looked like a scrawny, shorter, pimplier Justin Bieber—if Justin Bieber hadn’t showered in a week or had a haircut or shave in ten. I felt bad for Benny. I felt scared of Benny. Were people scared of me when they saw me? I was judging a book by its cover, but covers are a pretty good indication of what’s inside. I sensed Benny was rotting from the inside out, that all he had left was a tattered cover. I didn’t want to be a part of Benny’s story, but our plotlines had intersected just the same.

In any case, he shrugged. “Been in Denver a month. My train has long come and gone.” Again, he pointed. “That one goes east.”

The shrug hadn’t moved. “That terminal is a dead end. Trains enter that way and go back the way they came. That train came from the east. Do you have any drugs on you?”

It was an unsettling segue. Benny was unsettling. You could turn a bend and wind up like Benny. Benny had no hope. You could see it in his eyes. That is to say, you couldn’t see it. “I don’t do drugs.”

“You shouldn’t do drugs.”

He rested his head on his knee. “Yep.”

“It’s not that easy though, right?”

He turned his face my way. He’d been cute once. You could see it if you tried. How many people still tried? “Nope. Any money for drugs? I could trade you.”

I knew what he had to trade. I had the same thing to trade. “I have less than six dollars on me.”

He sighed. He turned his face back to the starting position. “Figures.” We sat there in silence. The trains didn’t budge. Maybe this was a graveyard of sorts. Maybe trains came here to die. Maybe Benny came here to die. Me, I had other plans.

Just the facts: Erotica with a solid plot, relationships that cross sexuality boundaries, authentic read, a retelling of a classic

This novel is a great ride. Erotica with a solid and engaging plot. Don’t look here for run-of-the-mill romance!- Kinzie Things 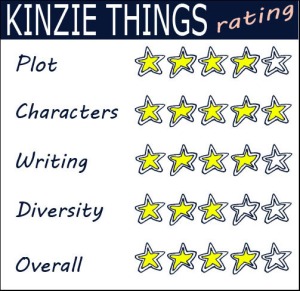 Twenty-three-year-old Ted is living on the streets when he receives an email )on a stolen iPad) letting him know that there is a will-reading in New York he needs to attend.  Getting to New York seems like an overwhelming task until Ted meets Benny.

Benny is a drug addict who lives on the streets. At first, Ted wants nothing to do with him, but desperation and they’re shared knowledge of the tips and tricks for living on the street resulted in them becoming reluctant traveling partners. When Benny goes into withdrawal soon after they hook up, Ted stays with him rather than heading onto the train that will take him to  New York.

As the two young men get to know each other, they forget one of the most unusual and intriguing relationships I’ve read in a book in a long time. Ted is gay, Benny is straight but they become intimate with one another… normally that kind of “gay for you” relationship would leave me with a feeling that it was fun, yeah, but not so realistic. Rosen makes the relationship between Ted and Benny work. Not only does their relationship work but it’s intimate, sweet, endearing, scary and flawed.

They continue to travel towards New York and a future that Ted doesn’t even understand. Sure, he could be someone’s long lost relative, but he could also be inheriting the family cat. He doesn’t know what the future holds, but then he never really has. There’s a little in this novel about just stepping out of yourself and doing something… anything. Moving forward is as important to Ted and Benny as appreciating what they have in the moment (if that makes any sense.)

The connection between Benny and Ted is already well established by the time they arrive at the D’urbervilles. This is when the novel gets even more interesting. The family lawyer still has no confirmation that Ted is a member of the family…there’s a month for him to continue his research. There’s something else going on in the family though. Ted can’t put his finger on it, but there are secrets that could be important when it comes to his connection to the family.

I’m not going to spoil the plot because I would love for people to read this book. There is a lot of sex in this book – which isn’t a bad thing at all – but there’s also a lot of plot. These two characters are intimate with one another long before they are doing more than holding one another. Rosen has created such a beautiful friendship with his writing, it’s the kind of friendship that will linger in my mind for a long time to come.

This is a great novel that just happens to be erotica as well. If that works for you…then you’ll love this book! 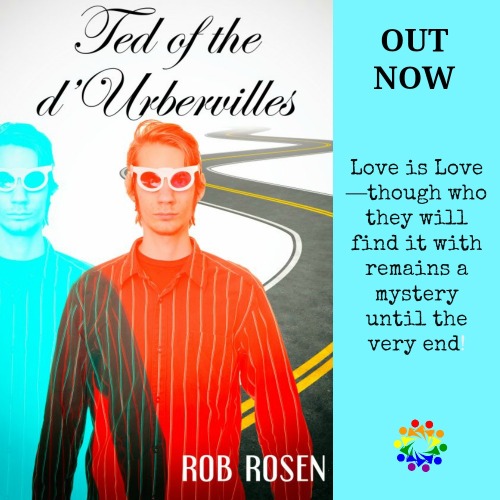 Please visit him at 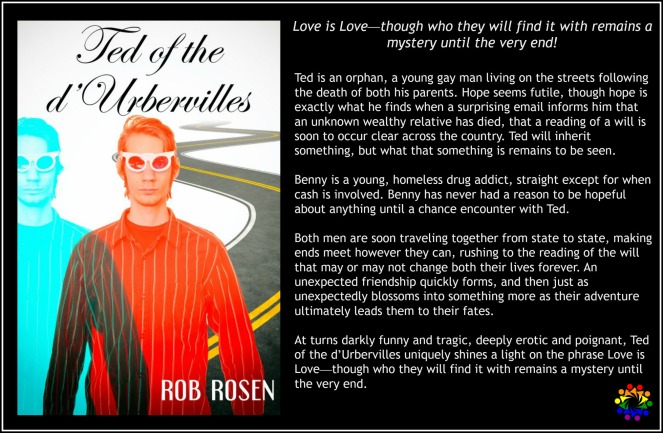