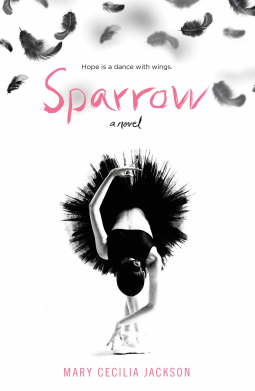 The Official Description: In the tradition of Laurie Halse Anderson’s Speak, a devastating but hopeful YA debut about a ballerina who finds the courage to confront the abuse that haunts her past and threatens her future.

There are two kinds of people on the planet. Hunters and prey
I thought I would be safe after my mother died. I thought I could stop searching for new places to hide. But you can’t escape what you are, what you’ve always been.
My name is Savannah Darcy Rose.
And I am still prey.

Though Savannah Rose―Sparrow to her friends and family―is a gifted ballerina, her real talent is keeping secrets. Schooled in silence by her long-dead mother, Sparrow has always believed that her lifelong creed―“I’m not the kind of girl who tells”―will make her just like everyone else: Normal. Happy. Safe. But in the aftermath of a brutal assault by her seemingly perfect boyfriend Tristan, Sparrow must finally find the courage to confront the ghosts of her past, or lose herself forever….

A story that delves into the world of domestic abuse.  – Kinzie Things

My thoughts bit:  There is a lot of sadness in this novel. If you are at all triggered by domestic violence and/or child abuse then this is probably not the story for you.

Sparrow is a ballet dancer. Ballet and the friends she has made there are her life… until she runs in front of Tristan’s car and collides with it.

Tristan is dashing, popular, gorgeous and abusive. Very quickly… Sparrow finds herself in a  relationship that is all-encompassing. Tristan is possessive and controlling. Soon his jealousy turns to anger and he’s physically abusing her.

No matter what Sparrow’s friends say – and they try everything – she won’t admit that she’s being physically hurt by the boyfriend who claims to love her. He always apologizes, he buys her gifts, and he always feels guilty. the problem is that the abuse never stops.

I found the time a little difficult to follow in this novel. The relationship between Sparrow and Tristan seems to advance from zero to one hundred in a very short space of time. it’s not that it’s not possible for a relationship to happen that way – it just seemed a little strange to me.

The other perspective in the book is that of Lucas. He is Sparrow’s dance partner and also… has feelings for her. he’s everything that Tristan isn’t. Lucas is sweet and kind, generous of spirit, and appreciates dance in the same way Sparrow does.

Lucas is not the object of Sparrow’s affection and despite his jealousy, he tries to be the friend she needs even when she refuses to tell the truth about her abusive relationship.

I enjoyed Lucas’ perspective more than Sparrow’s. I think I found her a little bit frustrating. Don’t get me wrong, I GET the issues with domestic violence and how difficult it can be to make the decision to get away … but I’m not sure that the author captured the hopelessness and fear of being alone… and the million other thoughts that go through one’s mind.

Maybe I just found Lucas’ perspective a more comfortable place to be as a reader.

The extreme violence that everyone is expecting finally happens and Sparrow is nearly killed. This is the point at which her past begins to be revealed. There’s much more to Sparrow’s past than the reader knows initially.

This book is emotional, especially Lucas’ perspective. (for me anyway) It’s violent but it’s about a topic that needs to be spoken about a lot more often.

Things You May Want To Know: Please be aware, I’m by no means an expert on what may or may not have the potential to disturb people. I simply list things that I think a reader might want to be aware of. In this book: (SPOILERS) Vivid descriptions of domestic violence, descriptions of past child abuse, the extreme physical battering of a woman until near death, emotional abuse by parent and boyfriend, bullying

I received an ARC of Sparrow by Mary Cecilia Jackson from Tor Teen via NetGalley in exchange for an unbiased review.