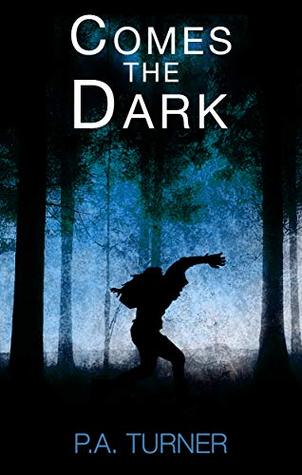 The Official Description: Comes the Dark exposes a corrupt politician’s shadowy world of human depravity. In possession of information which could blow that shadowy world apart, 18-year-old Kyle escapes a life of abuse and goes on the run. One step ahead of his pursuers, he flees the harsh realities of Glasgow’s homeless underworld, to the apparent safety of a remote Scottish island. There perhaps he can begin to recover from his past, and find hope, friendship, and a future. But freedom has a price…

Just the facts: A dark and suspenseful novel about the sex-trafficking industry.

My thoughts bit:  This is a poignant story about abuse of power and sex trafficking. Kyle is living an abusive life when he’s finally able to scrabble his way to a bit of relief via a nurse he meets in the hospital. Aaron is a huge support to Kyle when they meet, perhaps for the first time in his life, Kyle might have an ally. Before Kyle can begin to heal though, he finds that his past is still trying to drag him under.

The amazing thing about this novel is the depth to which the reader gets to know a rather large cast of characters. There are nurses, retired military/police, active professional, people with substance abuse challenges. All the characters read as very real because they’re well rounded and well-thought-out.

Throughout the course of this novel … and despite the continued violence and trauma, the characters deal with … comradery and found family is what emerges. Although this novel explores the darker side of society and the depths of human depravity, it also reads as hopeful. For every moment of darkness in this novel, there’s a moment of hope or light. I don’t mean that to sound trite, but it’s true. There’s a realistic balance in this story between the stark reality of some of the worst things that can happen to a person and the joy of small alliances and found family.

This novel won’t be for everyone as it contains some seriously violent and dark occurrences.

Things You May Want To Know: Please be aware, I’m by no means an expert on what may or may not have the potential to disturb people. I simply list things that I think a reader might want to be aware of. In this book: (SPOILERS) Vivid descriptions of sex trafficking, attempted rape and torture, kidnapping, violence, shooting, biphobic comments, PTSD in several people, description of a dead animal, descriptions of torture, finger amputation, and close confinement and sexual abuse of minors.

I received an ARC of Comes The Dark by P.A. Turner  via NetGalley in exchange for an unbiased review.