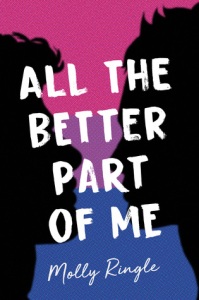 The descriptive bit: Sinter Blackwell is an American actor living in London when we first meet him. After a chance meeting with an industry colleague, he lands himself a role in a New Wave era movie – and that suits his style just fine. As Sinter explores the world of film making and gets to know his boss, Fiona more intimately… thoughts of his gay-best-friend Andy plague him. As Andy tries to sort through his changing feelings towards Andy, his intimate encounter with Fiona and his complex family dynamics… things get interesting.

My thoughts bit: This is a complex tale about figuring out who you are when life keeps tossing you curveballs. Sinter is a lovely character. He is one of those folks who walk the line in terms of gender and personal awareness. He wears a bit of makeup and is comfortable with it, at fifteen he offered to kiss his gay best friend when he found out he had never been kissed, and his head is a lovely place for a narrative!

Andy and Sinter have been best friends for years. Andy is gay and lives in Seattle, and at the beginning of the novel, Sinter is living in London as he pursues a career in acting. Sinter is a bewildered when he finds himself thinking of Andy … differently. He wants to hear from him, begins to find his thoughts wandering to kisses and touches. His exploration and confusion are sweet and I loved the way it was written.

Sinter’s family are about as far away from supportive as parents could get in terms of his “lifestyle” so he finds himself in a confusing place of not knowing what he wants, or who he wants it with. As Sinter explores his feelings and wants, he begins to feel the pressure to “come out” rather than pulling other people back into the closet with him.

Once Sinter moves back to Seattle, and takes Andy’s spare bedroom, their relationship begins to morph. Sure, the timing of Sinter exploring the fact that he’s probably bisexual could be better…but he’s open to it and Andy is certainly on board. But, keeping things emotion-free seems like a wise choice. Until it isn’t.

But that kiss tonight had been amazing, an essentially perfect kiss, and a perfect kiss can make you feel like the rest of life is about to fall effortlessly into place – Sinter in All The Better Part of Me

Ringle has written a lovely, in-depth exploration of a character trying to figure out his sexual orientation while at the same time, attempting to maintain his relationship with a conservative family.

There’s a twist in the plot about two-thirds of the way through that really throws a wrench into Sinter’s life. All the things he has been working towards seem to be unraveling before his eyes.

This book was a joy to read. Oh! and the titles are named after songs from the New Wave era.

The warnings bit: Please be aware, I’m by no means an expert on what may or may not have the potential to disturb people. I simply list things that I think a reader might want to be aware of. In this book: unplanned pregnancy, discussion of abortion and adoption, confusion about sexual orientation, unresolved sexual tension, healthy & casual sexual encounters.

I received an ARC of All the Better Part of Me by Molly Ringle from Central Avenue Publishing via NetGalley in exchange for an unbiased review.