The Official Description: As the son of music industry royalty and a famous rock star in his own right, Henry “Cinder” Cinderford has spent his life on the road. Craving stability, he signs on to do a special limited engagement in Las Vegas and plans to spend the next six months discovering the meaning of home.

After losing his mom at a young age, Ellis Tremaine survived a childhood with an abusive stepfather who took out his anger on the son he never wanted. Nearly two decades later, Ellis continues to struggle against the emotional manipulations of his family, even in his career. But when he meets none other than the Prince of Pop himself, things start to change.

From attraction to friendship to something so much more, Ellis and Cinder become the celebrity ‘ship known as “Cinderellis.” But when reality threatens their storybook romance, all they can do is hope there really is a happily ever after for every once upon a time.

This is the fairy tale that I didn’t even know I wanted! Two men who couldn’t be more opposite find each other… and then it’s all lost, and they must battle to find each other again. – Kinzie Things

My thoughts bit: “Cinderellis” is the second book in the “Once Upon a Vegas Night” series by Evie Drae. The first book, “Beauregard and the Beast” was adorable so I was pleased to read this second installment. What I didn’t expect was to love this book as much as I did.

Ellis is living a less-than charmed life. Music and audio engineering is his passion, but he’s held in place, stuck, by an unhealthy (and downright harmful) relationship with his stepfather. I think what I liked about Ellis was that it was clear that he was struggling to make something out of a life that was throwing him nothing but curveballs. He was working his ass off to try and keep going forward even though others were holding him back.

When Ellis is running the booth one night, he meets a man named Henry. What he doesn’t know is that Henry is in fact, Cinder…. the famous prince of pop. I loved the way that Drae wrote the interactions between these two. It was a lovely unfolding of a friendship between two people who were trying to reach out in ways that were foreign to them. The connection between Ellis and Cinder is touching and believable.

No spoilers here but let me say that this story does unfold much like its namesake but with the lovely Evie Drae twist! There is a little bit of angst, but Drae always writes the type of angst and longing that feels real to me. It’s not over-the-top or exaggerated; it’s the kind of heart-hurt that makes me appreciate the writing.

There are great supporting characters in this book. Cinder’s colleagues are fantastic. I loved Lisbeth and her partner Kumiko – they were hilarious and sweet and strong, amazing women. Loved the representation… and I’d love to read about them in the future!

This is a great story with characters that I loved. I can honestly say that I’m looking forward to reading any other stories in this series that Evie Drae comes up with!

Lastly, I need to draw your attention to the covers of these books! I really love the graphic interpretation of the stories… great, creative, and refreshingly different covers! I’d be pleased to have these on my bookshelf. 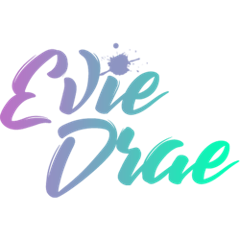 ABOUT THE AUTHOR (FULL BIO)

Evie Drae (Ze/Hir/Hirs) is a registered nurse by day and a best-selling, award-winning male/male romance writer by night. Ze has won first place in seven Romance Writers of America® (RWA®) competitions, including the prestigious title “Best of the Best” in the 2018 Golden Opportunity Contest. Ze was a double finalist in the 2019 Golden Heart® in both the Contemporary Romance and Romantic Suspense categories.

One of Evie’s favorite things to do is encourage hir fellow writers. To that end, ze started the #writeLGBTQ and #promoLGBTQ hashtags on Twitter to support and promote LGBTQ+ authors and allies while providing a safe space to connect and grow as a community. Ze is married to the love of hir life, is the parent of two wonderful fur babies, and runs almost entirely on coffee and good vibes.

Evie loves to link up with fellow writers and readers. You can reach hir directly at EvieDrae@gmail.com or find hir on hir social media accounts listed below. Twitter is where ze’s most active but be sure to check out hir blog too. Ze focuses on reviews for LGBTQ+ authors and allies with the occasional quirky advice/recommendation post just to toss things up.

Things You May Want To Know: Please be aware, I’m by no means an expert on what may or may not have the potential to disturb people. I simply list things that I think a reader might want to be aware of. In this book: (SPOILERS) supporting character with gambling addiction, substance use and abuse, death of a parent is mentioned, abusive step parent, physical abuse and emotional abuse by a parent, descriptions of a very intoxicated supporting character, violence, description of physical injuries, homophobia, a character is a survivor of abuse

Links: Goodreads // The Author / My Review of the first book in the series

I received an ARC of Cinderellis by Evie Drae from Clandesdyne  in exchange for an unbiased review.