Tom has one rule: don’t sleep with the crew. A second chance with a younger, gorgeous deckhand tempts him to break it.

After a busy season as a charter-hire skipper, Tom yearns for some downtime. His lonely heart also aches for adventure with someone special, but paying his bills has to come first. A surprise sailing contract and huge bonus offer his first glimpse of freedom for years. There’s only one catch: he must crew with Nick, a deckhand who jumped ship once already.

Nick’s as young and untested as the new yacht they’re contracted to sail, and he’s just as gorgeous. Forced to spend a month as Nick’s captain, Tom discovers depths he hadn’t noticed. He’s captivated, and happier sailing with Nick than he’s been in forever. However, their voyage is finite, and both men keep soul-deep secrets.

As the contract draws to an end, they must get honest about what’s in their hearts if they want to share a life at sea, and love, forever.

Featuring an age gap that’s only a number, forced proximity that makes hiding attraction impossible, and a yacht that’s nothing but trouble, His Compass is the second novel in the His MM Contemporary Romance series from Con Riley.

♥ This shared-world series starts with His Horizon, but each book follows a different couple, and can be enjoyed as a standalone novel complete with a fulfilling happily ever after. ♥

MY REVIEW: “His Compass” is the second book in the His Contemporary MM Romance Series and I was delighted when I found out that this book was about charter skipper, Tom. You know how there are characters that carve out a place in your heart no matter how limited their appearance is in a novel? Tom was one of those characters for me. When he appeared in the first book in this series, “His Horizon”, my heart was done for. In “His Compass” the Captain is asked to conduct a test of a new asset the company is considering. His heart is broken when he realized that this may mean the retirement of his lovely yacht, the Aphrodite.

When Tom realizes that he’s been assigned a new deckhand and that same deckhand that drove him crazy the first time they worked together. Nick might have been gorgeous, but he was forgetful, messy, and certainly didn’t know as much about sailing as he implied.

Reluctantly, Tom agrees to sail with Nick. He makes certain that Nick knows he must be honest about what he knows and what he doesn’t know and that he absolutely refuses to hear about Nick’s past. He wants no excuses.

Once the two men are on the sea and working together, Tom realizes that there is more to Nick than he suspected. Nick is sweet, he’s spontaneous and he is learning things. Nick sees the things that Tom has always thought were special: the stars, the beauty in people, and the subtle changes in the wind.

I’m not even capturing how wonderful the development of Nick’s character is. Con Riley has written characters in this book that are convoluted, authentic, and genuine. I went into this novel thinking that no one would live up to Tom in my mind…but Nick was perfect. At first, I wondered why he was on the ship… then I wondered why he was so hurt… then I just loved him as much as I loved Tom when I first read about him.

The relationship between these men is lovely. It’s perfectly paced, and it has more than a few challenges. There are some tropes that Riley has woven in seamlessly. Tom is older than Nick but apart from some humorous barbs, it’s a non-issue. The yacht provides some forced proximity which forces both men to acknowledge their feelings.

The depth to this story comes in the uncovering of the past of both main characters. Nick isn’t what he seems, and Riley unwraps his story slowly and sweetly throughout the course of the novel. Tom knows what he wants in his heart…but guilt has. Kept him on the same course for a long time.

It was lovely to get a visit with Jude and Rob who were the focus of the first book. I was curious about them and loved the dynamic of all four men coming together as friends.

If you like the m/m romance genre I would definitely recommend anything written by Con Riley. I will always recommend this series to readers as the character development is some of the best, I have read genre-wise! Such a wonderful story! These books can be read as stand-alones but trust me, you’ll want to read the series. I’m already waiting for the next book! 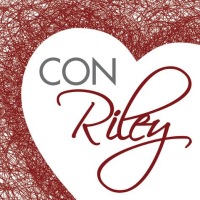 CON RILEY lives on the wild and wonderful Welsh coast, with her head in the clouds and her feet in the ocean.

Injury curtailed her enjoyment of outdoor pursuits, so writing fiction now fills her free time. Love, loss, and redemption shape her romance stories, and her characters are flawed in ways that make them live and breathe.

When not people-watching or reading, she spends time staring at the sea from her kitchen window. If you see her, don’t disturb her — she’s probably thinking up new plots.