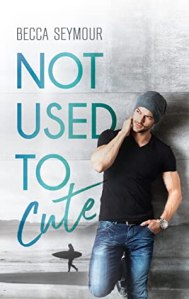 The Official Description: A bar owner who’s not looking for a relationship. A lost soul who’s afraid to trust. When Elijah and Seb meet, sparks fly. But will either of them find the courage to take what they want?

Pouring his all into his business, Elijah is perfectly content running his bar. With its prime location and its infamous drag shows, Bar QK is the place to be. Elijah is used to meeting new and sometimes interesting people, but it’s rare anyone catches his interest for anything longer than a five-minute conversation.

It takes a wandering, unfiltered surfer, who’s tired of the chase and dog-tired of people taking advantage of him, to spark long-buried interest in Elijah.

While kindness runs through his veins, Seb doesn’t believe in fairy tales. He has a past he’d rather forget and has no real expectations for his future. He believes it’s safer to not make assumptions about anything or anyone; that way, he’ll remain safe.

It takes his elusive, aloof boss, whose mixed messages are more confusing than Ikea furniture instructions, to show Seb that opening his heart can be worth the risk.

When Elijah and Seb find themselves working on a common goal, the high stakes may be just the nudge they need.

Not Used To Cute is a low-angst, beach-town gay romance set in the Sunshine Coast, Australia.

A lot of sweetness woven into a story of opposites finding each other. – Kinzie Things

My thoughts bit: Elijah owns and operates Bar QK. It’s an LGBTQIA+ club that has drag shows. Elijah is waiting on a visit from his little sister one evening when she comes in with Sebastian in tow. Sebastian is almost the complete opposite of Elijah and for the first time in his life, he finds himself attracted to someone who is “cute”, adorable, clumsy, and intense.

Sebastian is a surfer, carefree. Sometimes he knows he can be “too much”. It’s only because he can’t really keep control over his mouth once his brain starts going. When he meets Elijah he is attracted to him immediately, and they spend an evening chatting. It goes so well that Elijah even offers him a part-time job in the bar. It’s a perfect fit – and Seb would be lying if he said it wasn’t a plus to be closer to Elijah a few days a week.

There’s no big angst in this story, which makes it a short, pleasant summer read. The two men have issues – don’t we all – but they both have things to overcome so they can have what they both want. Elijah put his little sister before everyone else…and it ruined a past relationship. Seb has issues with being a bit smaller statute and the way that it makes people think he’s somehow less masculine. But, I swear it’s low angst.

There is someone in the book who is targetting the club. But the homophobia and hate crimes just seem to pull everyone together and make them stand their ground. I liked the “found family” aspect of this book a lot.

Things You May Want To Know: Please be aware, I’m by no means an expert on what may or may not have the potential to disturb people. I simply list things that I think a reader might want to be aware of. In this book: (SPOILERS) homophobia, homophobic language, assault (with paint), hate crime (physical assault), homophobic parents, supporting character with PTSD, anxiety, off-page physical assault, infidelity in the past is mentioned, diverse characters.

I received an ARC of Not Used To Cute by Becca Seymour via Gay Book Promotions in exchange for an unbiased review.