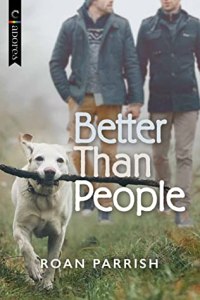 The Official Description: It’s not long before their pet-centric arrangement sparks a person-centric desire…

Simon Burke has always preferred animals to people. When the countdown to adopting his own dog is unexpectedly put on hold, Simon turns to the PetShare app to find the fluffy TLC he’s been missing. Meeting a grumpy children’s book illustrator who needs a dog walker isn’t easy for the man whose persistent anxiety has colored his whole life, but Jack Matheson’s menagerie is just what Simon needs.

Four dogs, three cats and counting. Jack’s pack of rescue pets is the only company he needs. But when a bad fall leaves him with a broken leg, Jack is forced to admit he needs help. That the help comes in the form of the most beautiful man he’s ever seen is a complicated, glorious surprise.

Being with Jack—talking, walking, making out—is a game changer for Simon. And Simon’s company certainly…eases the pain of recovery for Jack. But making a real relationship work once Jack’s cast comes off will mean compromise, understanding and lots of love.

This book is about figuring out what’s important in a relationship. What brings us the most joy? What are we more than willing to give up? – Kinzie Things

My thoughts bit: Roan Parrish is the author of one of my favorite series of books: Middle of Somewhere, so when I saw this opportunity, I signed up right away. “Better Than People” is a sweet summer read you may want to add to your list.

Jack is trying to figure out what to do with himself after a betrayal by a colleague that’s left him unable to create the children’s illustrations, he once made his living from. What makes him happy? Jack rescues pets. One of my favorite things about this book was the rag-tag band of housemates Jack has collected. They range from a cuddly Saint Bernard named… Bernard to a cat named Pirate who leads them on their walks. But it’s because of Puddles who gets an acorn on the jogging and races off… that Jack ends up with a nasty fall and a broken leg. So, who is going to take his dogs out for walks? His brother suggests a pet share app… so Jack puts up an ad.

Simon is the man who answers Jack’s add for pet care. He loves animals and has had to put off getting his own dog because he’s moved in with his grandmother. His grandfather recently passed away and he’s there to take care of her (although, I think it goes both ways in an adorable on-page relationship). But the man who struggles to appear at Jack’s door is severely incapacitated by shyness and anxiety. There are times when Simon struggles to speak when he gets so completely overwhelmed that he has to leave, and sadly – he suffered from severe panic attacks.

These two men are drawn to each other and boy do they both have challenges! Jack is bearing the weight of being betrayed by a long-term friend and business partner. Trust is a huge issue for him… trust and wondering if he’s been a burden to the older brother who raised him. Simon, on the other hand, doesn’t think that anyone would want a relationship with him. He’s lived his whole life struggling with anxiety and knows that he will never be “normal” and do the things that other people might consider to be day-to-day. Why would anyone want to be in a relationship with him?

The switching POV in this book gives the reader lovely insight into what both of these men are thinking as they begin to get to know one another. Simon’s struggle is real. Every day he fights to do the things that he wants to do. There’s a part of him that wants to be a different person for Jack…but there’s a bigger part of him that wants the world to acknowledge that he is who he is and there are some things that he won’t be able to change.

Ultimately, the book is about figuring out that “anxiety” isn’t your fault… that you are who you are. We can’t change the person that we are, sure, we can work on some things that will help us move through the world in a better way, but we can’t change some things. As someone who has lived with anxiety for my entire life, I really appreciated that Parrish didn’t make Simon’s anxiety something that could “be fixed”. I loved the fact that even though Jack struggles to understand, worries about the way Simon is feeling, the two men find a way to meet in the middle.

There are some dark times in this novel – obviously, the subject matter is a bit intense. It’s well worth a read!

Things You May Want To Know: Please be aware, I’m by no means an expert on what may or may not have the potential to disturb people. I simply list things that I think a reader might want to be aware of. In this book: (SPOILERS) name-calling, bullying, homophobic slurs, severe social anxiety, extreme anxiety

I received an ARC of Better Than People by Roan Parrish from Carina via NetGalley in exchange for an unbiased review.