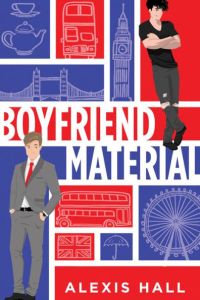 The Official Description: Wanted: One (fake) boyfriend
Practically perfect in every way

Luc O’Donnell is tangentially–and reluctantly–famous. His rock star parents split when he was young, and the father he’s never met spent the next twenty years cruising in and out of rehab. Now that his dad’s making a comeback, Luc’s back in the public eye, and one compromising photo is enough to ruin everything.

To clean up his image, Luc has to find a nice, normal relationship…and Oliver Blackwood is as nice and normal as they come. He’s a barrister, an ethical vegetarian, and he’s never inspired a moment of scandal in his life. In other words: perfect boyfriend material. Unfortunately apart from being gay, single, and really, really in need of a date for a big event, Luc and Oliver have nothing in common. So they strike a deal to be publicity-friendly (fake) boyfriends until the dust has settled. Then they can go their separate ways and pretend it never happened.

But the thing about fake-dating is that it can feel a lot like real-dating. And that’s when you get used to someone. Start falling for them. Don’t ever want to let them go.

Alexis Hall is a master of comedy and romance with a quirky edge. – Kinzie Things

My thoughts bit:  Luc O’Donnell lives a life in which his mistakes are always plastered all over the media. It’s got nothing to do with his own actions, his father is a famous musician. Luc just has a way of blundering into situations that make the paparazzi’s day. With his dad on reality TV, interest in Luc picks up again and a particularly unpleasant photo of him jeopardizes his job at a local “dung beetle” charity. You see, Luc’s boss doesn’t think that he’s the “right kind of gay” – they’re not homophobic, they just want him to give off a more professional image.

A quirky co-worker comes up with the idea that Luc needs a fake boyfriend. As ridiculous as it seems to him at first, the idea grows on him until he’s enlisting the help of his friend Bridg to find a candidate. She only has one other gay friend – Oliver Blackwell. Oliver is a lawyer with control issues and comes from a completely different world to Luc. There’s one thing that they do have in common though, and that is that Oliver needs a date for an upcoming celebration of his parents’ ruby wedding anniversary.

Of course, the main theme of this story is the “fake boyfriends” trope. Yes, it’s been done a lot but Hall has lent his usual flare to this theme. The overall story is emotional and a bit complex and it’s peppered with Hall’s trademark quirky sense of humor.

I think that Oliver Blackwell was my favorite character. He felt unique in terms of Hall’s characters. He was buttoned up and a bit too controlled. But, he was also very caring and sweet and there was an awful lot going on in his psyche that was revealed over the course of the story. Luc, on the other hand, was a pretty familiar character for me. He felt similar to a lot of Hall’s past characters! That’s not necessarily a bad thing: these characters are all great. Luc was just familiar as he was quirky, fumbling and comical to the max. That’s definitely a sweet spot for Hall. When you add in the “Gay Avengers” that are Luc’s closest friends, the trademark Hall comedy and sarcasm is in full force!

Things don’t go smoothly for these two characters as they get to know one another. There are feelings mixed up with the reality of what they’re doing. Naturally, things get a bit complex and there’s a lot of confusion and angst. There’s nothing particularly new about the way this plot plays out… after all “fake boyfriends” is a well-loved trope. But, as I said, it has the quirky humor of Hall to keep it going.

I will always read Alexis Hall’s books but I have to say this is probably my least favorite so far. That being said, Hall has set a high bar. Some of his books rate high on my list of the top ones I have ever read. This book is enjoyable and easy to read and above all, it’s endearing and funny.

Things You May Want To Know: Please be aware, I’m by no means an expert on what may or may not have the potential to disturb people. I simply list things that I think a reader might want to be aware of. In this book: (SPOILERS) mentions of substance abuse, parent potentially has cancer, absent father, lots of angst.

I received an ARC of Boyfriend Material by Alexis Hall from Sourcebooks Casablanca via Edelweiss in exchange for an unbiased review.