I’m having a fun trip with another series! I’m catching up on the “Speakeasy” series by K.  Evan Coles and Brigham Vaughn! I’m reading through the first three books and reviewing them leading up to the release of the fourth! Follow along!!!

Book 1: With a Twist

Book 3: Behind the Stick 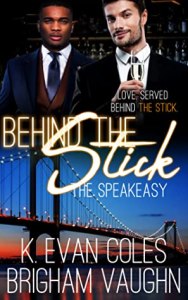 The Official Description: Love, served behind the stick.

Kyle McKee lives a charmed life. He co-owns Under, an uptown speakeasy, where he is chief mixologist. Friends poke fun at Kyle’s tiny one-bed apartment in Chelsea, but they’re the best support system a man could ask for. Unfortunately, Kyle’s lackluster love life has led him to take a break from dating.

Harlem resident Luka Clarke is a lieutenant with Engine 47, the Pride of Morningside, where he carries on his father’s legacy with the FDNY. Luka, who is mixed race and bisexual, has his eye on Kyle, whom he met at a local burger joint and he just needs to make time to visit Kyle’s bar.

Before work one evening, Kyle is trapped inside the luncheonette when a fire breaks out. Luka’s firehouse answers the call and he connects with Kyle again under the most unexpected of circumstances. When Kyle gratefully invites Luka and the firehouse squad to Under, the flirting between the two men leads to a date.

Kyle and Luka quickly grow close, but Luka’s mother and sister distrust Kyle for being both white and gay. Luka believes his family will come around and accept Kyle in the end, but Kyle is not optimistic and hides his disquiet as attraction blossoms into love.

Kyle and Luka’s near-idyllic bubble is shattered one evening after a hate crime leaves them scarred, inside and out. Shaken, they put on a strong front but struggle inwardly against fear and personal demons. As the emotions seething beneath the surface finally come to a head, both men must decide if they have the strength to find love enough to conquer hate.

Reader advisory: This book contains references to non-nurturing parenting; homophobia; racism and racist slurs. There are references to recreational drug use. This book also contains scenes of mmmm ménage and characters caught in a fire.

“Behind The Stick” is a wild ride! Intense emotions, frightening events and an epic love story.  – Kinzie Things

My thoughts bit: Kyle McKee, Co-owner of “Under” the speakeasy is one of the central characters in the third installment of this series. Kyle owns the club with Jesse who was the focus of book two. Jesse and Kyle have a solid friendship and business partnership and there is a sexual component to their relationship as well. But things have slowed down with Jess and Kyle since Jesse began dating Cam… and then Kyle decided to swear off dating. Then he met Luka.

Luka is a firefighter and pulls Kyle out of a fire at the local Burger Barn. They had met once before … but neither of them pursued the other… the fire changes Kyle’s mind. He invites the firefighters to “Under” and that’s just the beginning.

The romance is fast and furious in this part of the series! Luka and Kyle have a great sexual intensity and they genuinely enjoy being with one another. Luka fits in well with the Speakeasy crew and before they know it, the two men are tangled up with one another. I know I’m making it sound as though this happens quickly… and I suppose it does… but it’s really well written. The instant attraction is believable and sweet and very enjoyable.

Not everything is perfect for the new couple. Luka’s family isn’t as accepting as Luka wishes. Some of them are very welcoming, his sister and his brother in particular but Luka’s mother isn’t prepared to accept Kyle. It is revealed early on that Luka had a previous boyfriend who was white and he was ashamed of dating a black man. the scars of that relationship have left Luka a bit battered, but his mother and older sister judgemental and unwelcoming.

Kyle feels the resistance of Luka’s family. And I really liked the way the authors approached this topic. Later in the novel, it’s revealed that Kyle has some issues in his past that has left him a bit vulnerable when it comes to rejection. I like the way that family and/or friends are of great importance to the characters in this novel. The authors really explore the wider definition of what a family can be and I appreciated that.

Sadly, Luka and Kyle are the victims of a hate crime in the latter part of the book. They are attacked for being gay and an interracial couple. Both men fight to try and save one another and ultimately, Kyle buys them enough time that rescuers arrive. The damage is already done: Kyle has a terrible knife wound on his face and Luka is rattled to the core. The trauma and emotional fallout of the attack are really well-written. I could really feel how terrified both men were for each other and the frantic need to find out that the other was safe.

Things begin to crumble around the two men after the attack. This book really delves into the aftermath of a violent attack: guilt, fear, and anxiety. Both the main characters begin to question themselves and almost everything they say to one another. As their relationship unravels, they seem almost unable to stop it. It’s frightening and I really could feel the inability to extract themselves from their thoughts and pain. I really commend the author with the way they dealt with such a sensitive and heavy subject!

Another installment in this series that I really enjoyed! and don’t worry, there’s a HFN ending in this one! I’m sure there will be more about all the characters in the fourth installment of the series which is scheduled to come out on June 9: “Straight Up.” You’ve still got time to catch up on the series!

Things You May Want To Know: Please be aware, I’m by no means an expert on what may or may not have the potential to disturb people. I simply list things that I think a reader might want to be aware of. In this book: (SPOILERS) homophobic parents, open relationship, characters are hospitalized, hate crime involving severe physical assault, scarring on the face, judgemental family, racism, description of being trapped in a fire, character suffers from smoke inhalation, description of generalized anxiety, description of PTSD like symptoms, racist slurs.

I received an ARC of Behind The Stick by K. Evan Coles and Brigham Vaughn via Gay Book Promotions in exchange for an unbiased review.

One thought on “REVIEW: Behind the Stick (The Speakeasy #3) by K. Evan Coles and Brigham Vaughn”