The descriptive bit: Remy Cameron has to write an essay about “who” he is. There are facts that he knows: he’s a teenager, he loves his little sister, 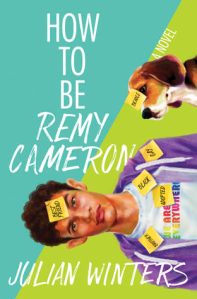 he’s adopted, he’s black and he’s gay. But what really defines him? Is it what he thinks of himself or what other people think of him? And, when it comes right down to it… who does he think he is…because he’s not sure he knows. Labels… there are a lot of labels in the world.

My thoughts bit: This was an enjoyable read and it’s a great book for any young adult.

“There are theories on word vomit. Studies that say the human brain expels so much information that the mouth cannot process and edit said info before it’s conveyed verbally. Real scientific stuff.” – Ian in How To Be Remy Cameron

One of the things that’s fantastic about this story is that it’s not based on a big trauma… no life-ending event… no tragedy of epic proportions. Remy is a young gay man trying to figure out who he is. Sure, there’s upset and hurt, there are close calls, and things that are potentially dangerous. But, this book is about a guy trying to figure himself out with his friends, his family, and other people who drift into his life.

The group of friends in this book is beautiful. They are diverse, flawed, a little crazy and sometimes border on epic: in other words, they’re real. And as Remy sums up himself so aptly… there are things going on in everyone’s lives.

“Or maybe it’s because, no matter how close people think they are to each other, there are always things unsaid, always vulnerabilities we don’t feel safe enough to share.” – Remy in How To Be Remy Cameron

Everyone will be able to find something for themselves in this book. It’s about families and how we fit into them, whether they are chosen or by birth. It’s about friendship and falling in love. This book is about being black, not being straight, being adopted, being uncomfortable, and wanting to go to the high school dance. There truly is something for everyone in this book.

The warnings bit: Please be aware, I’m by no means an expert on what may or may not have the potential to disturb people. I simply list things that I think a reader might want to be aware of.

I received an ARC of How To Be Remy Cameron by Julian Winters from Interlude Press via NetGalley in exchange for an unbiased review.