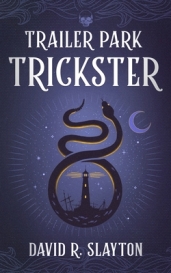 They are my harvest, and I will reap them all.

Returning to Guthrie, Oklahoma, Adam Binder once again finds himself in the path of deadly magic when a dark druid begins to prey on members of Adam’s family. It all seems linked to the death of Adam’s father many years ago—a man who may have somehow survived as a warlock.

Watched by the police, separated from the man who may be the love of his life, compelled to seek the truth about his connection to the druid, Adam learns more about his family and its troubled history than he ever bargained for, and finally comes face to face with the warlock he has vowed to stop.

Meanwhile, beyond the Veil of the mortal world, Argent the Queen of Swords and Vic Martinez undertake a dangerous journey to a secret meeting of the Council of Races . . . where the sea elves are calling for the destruction of humanity.

Trailer Park Trickster is book two of the Adam Binder Books. The first book, “White Trash Warlock” was an enjoyable read but the second book was more difficult to connect with.

In the second book, Adam has returned “home” to see what happened to his Aunt Sue. Because of his magical ability he knows that she has passed on, but doesn’t actually have any idea what happened. He returns to find that Sue’s estranged family has moved into the trailer he once called home and all his belongings are gone. Soon after he arrives at the trailer … it explodes. Adam finds himself tangled in another magical mess and this time it seems as though an entity is stalking Binder family members.

The plot of his story is split into a couple of paths. Adam is with his family attempting to understand what evil is hell bent on killing them and why.

Vic – the police officer Adam is bound to is with Argent. As he attempts to come to terms with his new role as a “reaper”, he is plunged into the political battles of the Elves.

I found I was quite interested in what was happening to the Binders. They are sleuthing their way through family trees, old properties and magical knowledge as they try to keep a determined, local police officer at arm’s length.

Vic’s story I found less enjoyable. The political intrigue between the various magical races was interesting but it felt like a lot of buildup and basically no resolution. Vic spends most of the book trying to get to Adam, then when he does… he leaves. Vic is conflicted over events in Adam’s past and I get that… it just felt a bit like he was stuck and his character didn’t grow. Nothing here is really revealed about Vic’s identity and/or powers as a reaper.

The writing was good for the most part. The story is told through the switching POVs of Adam and Vic. I found the voice of Adam to be much clearer and I enjoyed the growth of his character. Because of the trauma and dysfunction in his family, Adam has been quite distant. In this second book, the Binders begin to rebuild their family bonds slowly.

I didn’t feel as interested in the story in this book as I did in the first. I found Adam’s voice to be entertaining but the book felt a bit stalled to me. There was a lot of buildup … to a cliffhanger.

As an adult fantasy book, I feel as though this one is a bit of a miss for me. This book didn’t do much to advance the plot of the overarching story and I was disappointed that tit ended on a cliffhanger.

I received an ARC of Trailer Park Trickster  by David R. Stayton from Blackstone Books via Netgalley in exchange for an unbiased review.