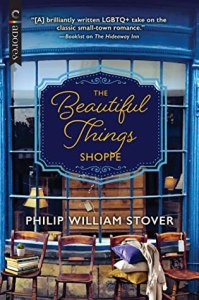 The Official Description: Their collections may clash but their hearts are a perfect match.

And yet here they are, trapped together in the quaint shop as they scramble to open in time for New Hope’s charming Winter Festival.

Danny has spent years leading with his heart instead of his head. The Beautiful Things Shoppe is his chance to ground himself and build something permanent and joyful. The last thing he needs is an uptight snob who doesn’t appreciate his whimsy occupying half his shop.

It’s only when two of New Hope’s historic landmarks—each as different as Danny and Prescott—are threatened that a tentative alliance forms. And with it, the first blush of romance. Suddenly, running The Beautiful Things Shoppe together doesn’t seem so bad…until Danny’s secret threatens to ruin it all.

Prescott and Danny couldn’t be more different if they tried! But when you put a quirky nerd and a introverted posh gent in the same store…things get interesting. – Kinzie Things

My thoughts bit: This is the second book of Philip William Stover’s that I have read and the second in the Seasons of New Hope series. New Hope is a small town with a diverse and quirky population and I love all the supporting characters. If you’d like to read my review of the first book in the series, it’s here.

In the second installment of the series, Prescott J. Henderson has moved to New Hope to open the store of his dreams. Prescott has a background in fine arts and his joy revolves around antiques. He has wanted his own shop for a long time and New Hope seems like the perfect place to do that. When he arrives, he realizes that his new retail space is actually shared! Not only does he have to share the space but it couldn’t be with anyone more different.

Danny is almost the polar opposite of Prescott. He’s quirky and outgoing, a self-proclaimed nerd, and interested in the colourful and ridiculous collectibles the populate the world. Even as he realizes that Prescott is gorgeous and is interested… there’s more to Danny that initially meets the eye. He has a secret and a past that leaves him not willing to take any chances on people.

It takes a project for these two men to work on together to bring them together. When a couple of the buildings in town are threatened by developers, Danny and Prescott pick up the battle. They work well together… Danny’s outgoing nature and Prescott’s nerves kind of “fit”.

Just when things seem to be going well between the two of them… things derail. Danny has to learn to trust… learn that not everything is what it seems and there’s hope for him.

As always, there are some great supporting characters in this book. New Hope is just the kind of town that I would like to live in, to be honest! Read this series if you love m/m romance but need good, solid, writing and wonderful characters.

I received an ARC of The Beautiful Things Shoppe by Philip William Stover from Carina Adores via NetGalley in exchange for an unbiased review.