Surviving the Break by C.P. Harris

Max doesn’t do repeats, and he definitely doesn’t do commitments. Months after a hot encounter with a smooth-talking stranger in a bar room bathroom, Max comes face to face with the same sexy doctor during the unveiling of the community center’s dance studio. And the man is just as pushy and perceptive as Max remembers. Because of their mutual friendships, Max now has to work overtime to keep Dr. Ashton Jackson at arm’s length. Will he succeed in resisting the undeniable attraction he feels toward the man, or will he risk putting his heart on the line for love… again?

Ash isn’t afraid of love. He’s just never met The One. But there was something about the brown-eyed stranger he hooked up with that he can’t get out of his head. When their paths cross again unexpectedly, Ashton hopes to convince the wounded man with the heart of gold to give love a second chance. But what happens when the truth behind Max’s heartache threatens to leave Ash questioning everything he’s ever believed about himself? Will he too be left broken? Or will he and Max survive the break?

**An M/M romance and book two in the Chadwick series. Can be read as a standalone. Heat level is high. 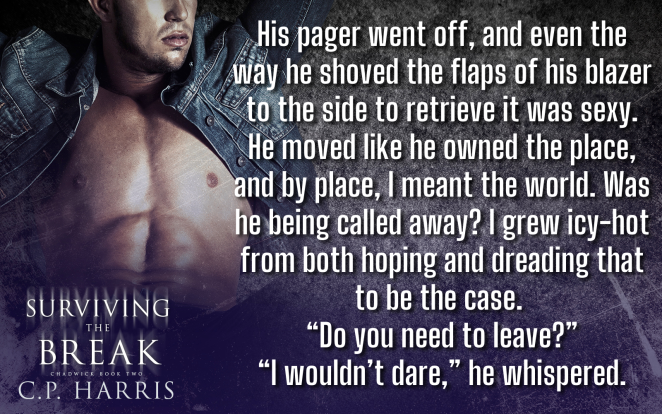 My Review: C.P. Harris is continuing her “Chadwick” series with “Surviving the Break”. If you follow my reviews on any social media platform then you will know that the first book “Surviving the Merge” is one of my favourites of the M/M romance genre. I was a little apprehensive going into the second book as I had such high expectations! I’m happy to report that Harris didn’t let me down! I would say that you could read this book without having read the first one…but if you did, you’d be missing out on a fantastic book.

Max heads out one night hoping for a hook-up. He doesn’t do relationships… not anymore… and he finds himself having an encounter that sparks something inside him to life. He’s left with the man’s jacket and a business card… but knows he’ll never see Ashton again. Except… that he does. Ashton, it turns out, is Damon’s best friend, Ash and he is definitely interested in more with Max.

While “Surviving the Break” is a less complex plot than the first book in the series it has several things going for it. This book partially overlaps with the timeline of the first book. For those of you continuing the series, this provides lovely glimpses into the previous character. For instance, Damon – one of the main characters from the first book – appears throughout this second novel. I was left with a much better understanding of his characters and loved getting to know him from the perspective of his best friend, Ash.

Ash is a wonderful character. It would be easy to dismiss him as a “stereotypical” doctor at first, but Harris has gifted her readers with another unique and interesting character. I fell in love with Ash. He’s cocky and self-confident, he’s caring, he is so honest it’s painful and he’s funny. He’s grown up in a very different way to Max.

Oh, Max. Max appeared in the first Chadwick book as Justin’s neighbour. He was a little skittish, sweet and had a wounded sort of air about him. In this book I was totally engaged with his story. Max has heart ache and betrayal in his past. Harris reveals this through cleverly placed flashbacks to Max’ youth. I loved the pacing of the reveals. I found myself unable to put the book down because I needed to know what had wounded Max so badly. The depiction of Max’s hurt was intense.

These two men together are a recipe for a hell of a chase, smoking hot sex and heartache. I loved how Justin and Damon were woven into this plot… it was so interesting to see them from another perspective. There is a great cast of supporting characters as well including a lovely young trans dancer. Harris has an eye for details and even the supporting characters demonstrate growth and movement.

Harris has a really great writing style. The book is emotional and engaging without being over-written or cumbersome. Some of Harris’ sentences are so direct and efficient and yet still a complete punch to the gut. I can’t really explain it, but these books are really some of the best of have read in 2020 (If not ever). You definitely won’t regret reading this series.

The farm sat on twenty acres of land. We drove past it on our way to the cottage about a half a mile down the road. We unloaded the bags from the trunk and went inside, Pluto bringing up the rear.

In the hearth, a fire blazed, and the lemony scent confirmed the place had been freshly cleaned. The cottage was quaint. A simple living room, kitchen, a half-bath, and a bedroom with a master. Light wood and cream furnishings made up the decor.

I followed Ash down the hall to the bedroom. “Ash, you’ve been quiet since our encounter with Hayden. This isn’t like you. Talk to me.” I made a grab for his arm, but he pulled away.

“Have you ever fucked in a barn?” he asked.

He swooped into my personal space and kissed me. The shift made me lightheaded, but I let him take what he needed. “I want you,” he said, before eating away at my lips again. I went with the flow, trying to remove his shirt. “Not here,” he said. “In the barn.”

I stepped back, adjusting myself in my jeans. “Why the barn?”

“Or there may not be,” he countered.

“Ash.” I struggled for anything to say that would defuse his course. “The barn will be cold.”

His gaze strayed to the bed, and he snatched the king-sized comforter off it. “Problem solved.”

He was distant and internalized. It wasn’t like Ash to not express himself. I led the way.

The barn was empty, and I lit a kerosene lamp while Ash removed his clothes. I rested the lamp on a low wooden table.

“Yes, of course.” I licked my lips at the sight of his hard nudity.

He spread the blanket over the hay and got down on all fours, ass facing me. He peered over his shoulder, undulating his hips as he seared me with a dark, heat filled gaze, his balls swinging like bells between his spread thighs. “Prove it.”

Ash liked to top me when he thought I needed to be reminded that I was his, but when he needed reassurance that he was mine, he all but begged for a good ass-fucking. “Ash—” 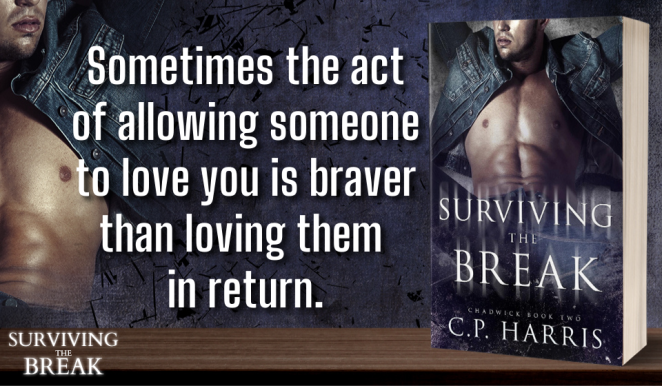 To celebrate C.P.’s new release, we are giving away $5 Amazon Gift Card & an e-bundle of the 2 current Chadwick Books!

Enter the Rafflecopter giveaway for your chance to win!

Check out Book 1:
Surviving the Merge by C.P. Harris

My name is Justin, and when I was seventeen, I fell in love with a boy named Damon.
Damon was sick, only I didn’t know it at the time. And like any disease left untreated, it festered and burrowed into the unaffected areas of us, until we were both so far from healthy, we were killing one another. Then a tragedy sparked our implosion.

With nothing of us remaining to salvage, I was left to pick up the pieces, while Damon found his escape in the abyss. Leaving me alone with his alter, Blake.

Damon and Blake are two halves of a whole. But Damon is the coldest part of darkness, and Blake the warmest part of light. Which form of ecstasy would you choose?

I love Blake with a ferocious intensity akin to the peeling back of skin. Except Blake isn’t Damon, but Damon was gone—until now.

What once threatened to tear us apart has become our catharsis.

Outnumbered in a relationship with the man who is my life, I’ve begun to learn more about love than I ever thought possible.

But can our love survive the merge?

**An M/M romance and book one in the Chadwick trilogy.
Can be read as a standalone, no cheating, no cliffhanger, and ends with an HEA. **WARNINGS: Contains explicit sex, violence, graphic language, and an MC with dissociative identity disorder.

Author’s note: For a full set of trigger warnings, please use the Amazon “look inside” feature to find them within the first several pages.

C.P. Harris resides in the city that never sleeps, although for her it’s lights-out by ten. She grudgingly dedicates her nine-to-five time slots to the finance world, but her most important role is mother to teenage twins. Her hobbies include, traveling, boxing, reading, writing–and more reading. And… more writing. She’s always had dreams of being a writer and after waking up from the most disturbing but romantic dream one April morning, she ran out and bought a laptop and hasn’t looked back. Romance is where her heart is, but she has plans to spread her wings across genres.