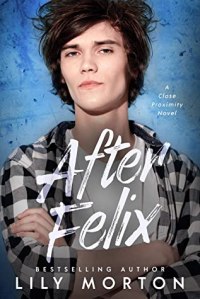 When Felix met handsome journalist Max Travers, it was lust at first sight. It was just his luck that he then had to develop a terrible case of feelings and got his heart broken. However, two years later, he’s over all of that. His job is going well, he has good friends, and he doesn’t lack for male company. Which, of course, is when Max has to come bursting back into his life.

Felix Jackson will always be the one who got away to Max. He’s spent two years regretting his actions and hoping for a second chance. When an accident lands him in Felix’s less than tender care, Max is determined to grab this opportunity. The only problem is that Felix is equally determined that he doesn’t.

This is the third book in the Close Proximity series, but it can be read as a standalone.

Felix had my heart from the opening page and then Max stole it from him halfway through this book. My favourite romance of the summer! – Kinzie Things

My thoughts bit: I have read and enjoyed a lot of Lily Morton’s romances and I can absolutely say that After Felix is my favorite. From the very first meeting of the main characters, I could tell that I was going to be in for a roller coaster ride and I loved it.

When free-spirited and sharp-witted Felix meets journalist and author, Max the sparks fly. Within hours of the meeting they embark upon a physical relationship that ignites that pages of this story.

Felix is young and doesn’t want any attachments. He’s happy with his life the way it is and … prickly-yet-adorable exterior aside, he doesn’t want to get hurt. His mother died when he was young and left him enough money to buy the boat upon which he resides and he works for his friend, Zeb at an LGBTQ friendly company. Add the ability to hook up whenever he wants to that and his life is perfect. Okay, so his Dad may show up drunk from time to time and blame him for things that aren’t his fault… but he’s tough. He’s built walls. He doesn’t need anyone to care about him… until he wants it.

Max has been through a lot. He was a journalist in war-torn countries, was held hostage and went through most of it with his best friend and casual lover, Ivo. He loves hooking up with Felix but won’t stay over, because he tells himself what they are doing is completely casual. He’s recently retired from being a foreign correspondent and is struggling with what that means about his life. He loves luxury after so long living rough and in danger. And he … enjoys sex with Felix a lot. It’s just that eventually… the feelings get a bit much.

The problem is that both men are deceiving themselves in their own way. You know me, folks. I’m not giving away any pertinent details… but I feel confident that if you’re a fan of the genre you’ll love this book.

There is a bit of angst in this story. There are things that both men don’t want to hear, truths they can’t face, and mistakes they make, but there is something remarkable authentic about the relationship between Max and Felix.

One of the things that I found really great was that nothing is resolved “immediately” in this story. As in life, these two men made mistakes and then had to take the time to be apart, to work on themselves, and to grieve the loss of what they had. Morton has given the main characters the exact amount of time they need to have feelings and emotions that seem real and valid.

There’s a lot to love about Max and Felix. The banter between them is a thing of beauty. Felix is witty and hilarious and still managed to make me tear up. Max is clever, brooding, and confused and won me over in spite of myself. Morton has really created two genuinely unique, entertaining, and interesting characters. And the thing is… I loved Felix from the moment I met him… and then, halfway through the book, Max won me over and absolutely broke my heart!

There is also a great supporting cast of friends… and Morton does a great job of setting the world in which these men travel. I’m least with tears in my eyes and an overwhelming urge to read a Rupert the Bear book.

If you’re like me and love to read a funny book that may have you blinking away a few tears (some of them because of happiness) then pick up this book!

Things You May Want To Know: Please be aware, I’m by no means an expert on what may or may not have the potential to disturb people. I simply list things that I think a reader might want to be aware of. In this book: (SPOILERS) Lots of angst, substance abuse, brief mention of PTSD, character has nightmares.

I received an ARC of After Felix by Lily Morton from Gay Romance Reviews in exchange for an unbiased review.