It is a standalone story

Will an idyllic summer holiday lead Arnie to the love of his life, or the end of it?

It should be the start of a perfect vacation. After a period of stress, Arnie Walker takes his nine-year-old son AJ home for the holidays. Arnie grew up in Nyemouth, a picturesque fishing town on the North-East coast of England, and he wants AJ to experience the kind of carefree, endless summer he enjoyed as a boy. It’s a short-lived dream. While taking an evening walk along the North Point cliff, Arnie and AJ witness a murder attempt.

For the volunteer crew of Nyemouth Lifeboat Station, it’s a rescue mission like none before, Helmsman Dominic Melton is part of the team who rescue the victim from the deadly North Sea. When Arnie and Dominic come together in the aftermath of the attack, the attraction is instant. Arnie isn’t looking for a relationship. He’s committed to his son’s well-being and has no time for a distraction like Dominic, even though the handsome ex-naval officer is hard to dismiss. Is it possible for Arnie to fulfill his promises to AJ while falling for Dominic?

Despite the distraction, a fledgling killer remains at large. As feelings between Arnie and Dominic develop, so does the danger they are in. North Point may be a beautiful place to fall in love, but it could also be the most dangerous.

“The police are outside,” Dominic said. “They want statements from all of us.” He had large and very expressive brown eyes. Within them, Arnie saw flecks of amber and gold. With his dark hair and muscular build, Dominic looked every inch a hero.

No, Arnie corrected himself. This guy doesn’t look like a hero. He is a hero. The entire crew are. It was more than the way he looked. There was an aura about Dominic, an undefined energy that made him incredibly attractive. Arnie had worked with some exceptionally good-looking men in his career, bona fide Hollywood heartthrobs, and none of them had Dominic’s naturally sexy quality. Everything about him—his face, his hair, his build—appealed. He was a knockout.

Come on, Arnie thought, pulling himself up. You’ve just witnessed a horrendous crime. A woman is fighting for her life this very minute and you’ve taken a fancy to the local hot guy. Get a grip.

He dunked a biscuit into the tea and ate it. His father was right—the sugar seemed to have an instant effect and his senses became clearer.

“How rough were things out there?” Martin asked.

“The sea’s getting up,” Dominic answered. “The wind too. Another half hour and we might not have got in there. It wouldn’t have mattered if we did. The tide would have taken her by then. It doesn’t bear thinking about.”

“You’re amazing,” Arnie said, and meant it. Dominic and the crew of volunteers had risked their lives for the safety of a complete stranger. They might all have died trying to rescue her.

“I just drove the boat,” he said. “My colleagues— Joanne and Minty—they did the hard work. They transferred the woman from the rock to the boat and kept her stable the whole way back. That’s no easy job in those swells.”

“Does anyone know who she is?” Martin asked.

“Minty thought he recognized her from around town but couldn’t be sure. It’s for the police to find out now.”

“It’s hard to believe something like this could happen here in Nyemouth,” Martin said. “Something so cruel. Who do you think did it? An ex-boyfriend?” Martin and Dominic looked at Arnie expectantly.

“I’ve no idea,” he said at last, avoiding the intense scrutiny of Dominic’s eyes. “Whoever it was, they kept their face hidden. It could be anyone. And they came from behind. So, even if it was someone she knows, I doubt she’d have recognized them.”

“Bastard,” Dominic said. He had a slight accent Arnie couldn’t place. Northern. Maybe Yorkshire. Nothing definite. The accent of someone who moved around a lot, losing all but a trace of their regional twang. A bit like his own. It was hard not to look at him. He was stunning. That hair, the glossy sheen of his beard, the moody furrow between his eyebrows. Wow. Despite everything that had happened, Dominic aroused something in Arnie. It should have been the last thing on his mind, but Arnie couldn’t stop the desire he felt for him. He imagined holding him and kissing that mouth, thinking about the body beneath those clothes.

Arnie finished his tea. “I should speak to the police. The sooner they know who they’re looking for, the sooner they’ll find him.”

“Are you feeling better?” Martin asked.

“Much,” he assured his father. “Thanks to you.”

“Take care of yourself,” Dominic said. “I wish we’d met under better circumstances. Hopefully I’ll see you around some time.”

My Review: North Point is my introduction to Thom Collins and I’m definitely on the lookout now for more of his work!  This novel begins with actor Arnie and his nine years old son AJ returning home to a small town to avoid the media. Arnie was once married and his ex-wife is quite the media magnet – unfortunately for all the wrong reasons. That attention was carrying over to Arnie and his son.

Arnie has had full custody of his son since some terrible photos of AJ and his mother were posted all over the place. He gave up what he was doing to focus on his son, made him his top priority.

The retreat to Arnie’s childhood home is supposed to be a vacation…but on a lovely evening walk Arnie and AJ witness an attempted murder. This launching them into a mystery!

The other main character in this story is Dominic. He is the helmsman for the Coast Guard boat that resides in the town. He’s happy with his work, his house, his dog Brandy, and the friends he has. But when he meets Arnie, for one of the first times in his life, he thinks he might be open to wanting more.

I really enjoyed this story! It’s not just the romance – which is lovely and very hot – but because there’s such peril and mystery. There are also a few interesting issues addressed that I always enjoy.

As an actor, Arnie deals with media intervention in his life constantly. Collins addresses the intense scrutiny of the media and the effect that it can have on people’s lives. I hadn’t really ever thought about the way that photos of someone could be seen by their child…and that isn’t a healthy situation at all.

Arnie is a wonderful father and I loved that. He’s capable, loving, and fiercely protective. It’s lovely to see a father … simply being a father. I find too often in books that a father is portrayed as a “babysitter” rather than a “parent”. There’s none of that in this book, and I loved it.

Small towns are full of gossip and that’s something else that Collins addresses in his book. Everyone knows everyone else’s business – but the problem is that they often get it completely wrong. I grew up in a small town so I know what it’s like and it’s captured well in this book.

One of my favorite characters is AJ and I think that’s really because of the relationship with his father. They have a lovely, healthy relationship and it was a pleasure to read. There is a scene towards the end of the book that had me afraid to stop reading! I’m not going to spoil it for you… but it is particularly well-written and, let me tell you, it’s been a long time since I read something that intense! I was on the edge of my seat!

This is a great book and I’m really looking forward to reading more in this series! 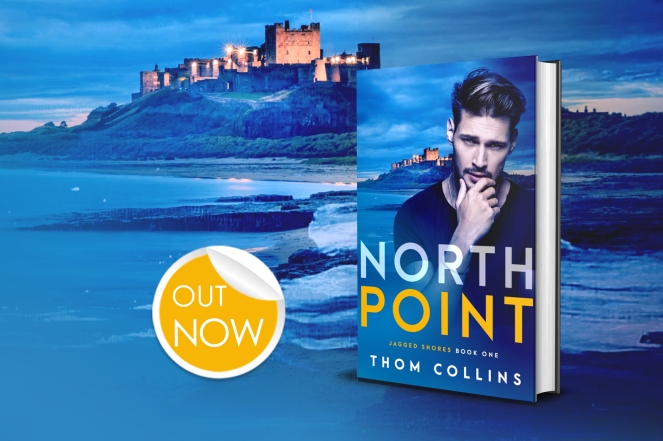 Thom Collins is the author of Closer by Morning, Gods of Vengeance, Silent Voices and the Anthem Trilogy. His love of page turning thrillers began at an early age when his mother caught him reading the latest Jackie Collins book and confiscated it, sparking a life-long love of raunchy novels.

He is currently working on a new series.

Thom has lived in the North East of England his whole life. He grew up in Northumberland and now lives in County Durham with his husband and two cats. He loves all kinds of genre fiction, especially bonk-busters, thrillers, romance and horror. He is also a cookery book addict with far too many titles cluttering his shelves. When not writing he can be found in the kitchen trying out new recipes. He’s a keen traveler but with a fear of flying that gets worse with age, but in 2013 he realized cruising is the best way to see the world.

Check out his website for news updates and a free ebook The Night.

one of five ebooks from Thom’s backlist