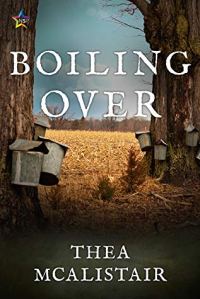 The Official Description: On the run from trumped-up murder charges, Alex Dawson and his boyfriend Sev settle in a small town in Vermont on the recommendation of Sev’s mob-boss cousin Bella. Chickadee is so tiny that it has only one major employer in the depths of the Great Depression: Trask & Co. Maple Sugar Mill. It’s a quiet place. That is, until Walter Trask is found in his own maple grove with his head smashed in.

Alex doesn’t want to have anything to do with the death, but things get much more personal when Bella is falsely arrested. Determined to free her and even the scales, Alex scours the town for clues as to what really happened. He quickly learns that small towns have big secrets that people may be willing to kill for. And if that weren’t bad enough, Alex and Sev’s once-sweet relationship is turning bitter under the combined pressures of isolation, anxiety, and jealousy. Alex needs to find the true murderer quickly before Bella is turned over to the feds, or worse, Sev walks out of his life forever.

Alex and Sev are back and STILL in trouble. Hiding in a small town was their only escape, but danger and intrigue has follwed them. – Kinzie Things

I’m a fan of this series already! Book one: No Good Men, was a great start to the Caro series. Alex and Sev met in the first book. This series is set in the 1930s so it’s not a world in which gay men can live openly. By a twist of fate, they find one another and become involved. The first book ends with the two men and their young neighbor Pearl … on the run.

When they arrive in Chickadee, everyone already knows their name and it’s not long before they’re on the radar of the local police. Why? Because there’s been a murder. Crime follows these two! Again, they find themselves attempting to solve a crime while not getting in any deeper. Bella shows up and things get even more complex when she is arrested for the murder!

While the “case” is being worked, Alex is losing his mind a little bit. He’s in a relationship for the first time in his life and he’s still learning so much about being in love. Sev is a bit older than Alex and his temperament is slightly more laid back so he seems to be taking it all in stride. He is out of his element and finding that raising a child is a constant reminder of his behavior and the fact that there are always eyes on him.

As Alex struggles with the events that are going on around him reminding him of his own losses and the danger they have so recently fled, his mood sours and he begins to feel some distance between himself and Sev. Because Alex is spiraling out of a control a little bit, he begins to be jealous of Sev’s friendship with a local woman… manifest destiny!!!

Much of this book is about secrets. When Alex and Sev arrived in town it was with their own secret…they have fake names and identities and must continue to hide who they are to one another. Alex is also bottling up his emotions instead of talking to Sev about them, and that is making them both unhappy. Secrets take their toll! The town itself seems to be mired down in secrets as well. There are women who have been treated foully by their spouses, there are people having affairs, secret children and disintegrating family relationships.

McAlistairdoes a great job of creating the small-town feel of Chickadee. There are always people gossiping about everyone else and there’s no such thing as privacy. I grew up in a small town so I know of what I write!

You should definitely read the first book before reading this one! This is a great series and I’m glad that this novel ends with a teasing cliff hanger !!! That means there will be more coming!

Things You May Want To Know: Please be aware, I’m by no means an expert on what may or may not have the potential to disturb people. I simply list things that I think a reader might want to be aware of. In this book: (SPOILERS) Descriptions of dead bodies, physical violence, severe injury to head, child held at knifepoint.

I received an ARC of Boiling Over by Thea McAlistair from NineStar Press via NetGalley in exchange for an unbiased review.