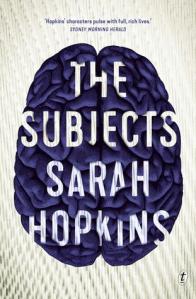 The Official Description: As we got closer I could see behind the sandstone a curved concrete building: a purpose-built structure. But still no fence, no wire. Not a bar in sight. For this, I’d been told that morning, I should be grateful. This was a ‘lifeline…a last chance’. That is what the judge said.

Daniel is a sixteen-year-old drug dealer and he’s going to jail.

Then, suddenly, he’s not.

A courtroom intervention. A long car ride to a big country house. Other ‘gifted delinquents’: the elusive, devastating Rachel, and Alex, so tightly wound he seems about to shatter.

So where are they? It’s not a school, despite the ‘lessons’ with the headsets and changing images. It’s not a psych unit—not if the absence of medication means anything. It’s not a jail, because Daniel’s free to leave. Or that’s what they tell him.

He knows he and the others are part of an experiment.

But he doesn’t know who’s running it or what they’re trying to prove. And he has no idea what they’re doing to him.

A book about how we see each other, how we are at peace… and what may help us find our way when we are lost. – Kinzie Things

Sixteen-year-old Daniel is on the verge of being sentenced to time in juvie when fate intervenes. He is detoured to a new place… a place with no bars, a place he’s told he is “lucky to attend”, In spite of the fact that he’s unsure of where he’s headed, he agrees to the compromise.

The majority of this novel is set in the institute that Daniel is sent to. It’s an intriguing place. Apart from an initial physical run-in with one of the interns … it seems as though it’s not such a bad place. Daniel meets with Dr. J who seems to run the institute. They don’t have what Daniel would consider therapy sessions, at first they only meet to work out a contract encompassing what they both want.

The story unfolds from Daniel’s perspective when he is in the institute and from snippets of an inquiry that is happening a decade later. It’s clear that something has happened during Daniel’s tenure that resulted in an investigation but the reader is along for the ride with Daniel. Throughout the novel, he tries to piece together his memories, the transcripts and some new information to build the story of what happened.

All the young people who are at the institute are meeting privately with Dr. J. All of them have different items in their contracts. They work on subjects that interest them, they learn about themselves, and it seems as though they are setting their own pace as they struggle with their individual challenges. Daniel’s past is littered with abusive men who were brought into his life by his mother. He explores her weakness and his frustration as he reluctantly divulges bits and pieces of his personal history the way he remembers it.

All of the characters in this novel are interesting. They are full-bodied, revealing deep secrets and strange little nuances about themselves. The characters all interact with one another differently, and the longer they spend together the more they seem to learn about getting along with one another.

Ultimately, I feel like this book is about weighing the value of different types of treatment for people living with mental illness. I was touched by the twist at the end of the book (I’m not going to reveal it here). The story has left so many questions in my mind: is medication the answer for mental illness? Do we all just need to be listened to? Are some people so affected by the negative aspects of the world that they are unable to exist peacefully? What if mental illness isn’t abnormal and is simply a variation of normal?

This tale is firmly planted in the contemporary world. It felt to me as though there was a component of science fiction in it, perhaps just because some of the “therapy” and “lessons” were a bit above my ability to understand. I’ve been curious about some of the things the author described and have found myself researching them.

“I was not playing God; I was trying to block out the noise so I could hear him.” – Dr. J.

If you love interesting characters and an intriguing plot…that isn’t handed to you on a platter… yes, you have to think about this one (and I love that) then you will enjoy this book.

Things You May Want To Know: Please be aware, I’m by no means an expert on what may or may not have the potential to disturb people. I simply list things that I think a reader might want to be aware of. In this book: (SPOILERS) Descriptions of physical abuse, descriptions of domestic violence, descriptions of bullying, suicidal ideation, a character commits suicide, description of a dead body, death of supporting character, a character with an eating disorder, character victim of child abuse (exorcism by religious extremists), character prone to violence outbursts.

I received an ARC of The Subjectsby Sarah Hopkins from Text Publishing via NetGalley in exchange for an unbiased review.