The official description: Huge, horrid creatures with a taste for human flesh have been invading Seacliff Manor and its surrounding lands for years. 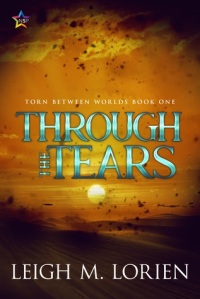 Ghouls are coming from another world through portals made of magic. No one knows why or how, but nothing good ever comes with them.

During a hunting trip, Eamon encounters one such monster and falls through a portal into the ghoul’s hellacious desert home world. Separated from his home, his friends, and his lover, with no magic of his own and no sign of other life, Eamon expects to die there…until an encounter with a lone stranger gives him hope. There is a way home. But can Eamon survive alone in ghoul-infested terrain long enough to get there?

Worlds away, the Lord of Seacliff Manor is determined to bring Eamon home. Despite all evidence to the contrary, Rafe knows his human lover is alive. It’s just a matter of finding out where. To that end, Rafe has a plan. It’s dangerous, perhaps even suicidal, but he’ll do anything to save the man he loves.

From different sides of the galaxy, the lovers fight monsters and seek magic with one goal in mind: reunion. Monsters aren’t the only things they’ll have to defeat to find their way back to each other, and the horrors uncovered along the way may be more than they can handle.

My thoughts bit: This book gets a running start in terms of action! From the very first words, the reader is thrown into a world in which a violent beast has just killed or possibly snatched a human. The human who has disappeared is Eamon and his partner Rafe is hell-bent on finding him.

This world which is clearly adjacent to ours is an interesting place. Rafe is a Rin; a human-like species that “drinks” energy/life force. Over time, the Rin have formed an agreement with the humans from whom they drink. There are strict rules about the feedings, and it quickly becomes apparent that Rafe and Eamon’s relationship is unusual. Eamon and Rafe have bonded; it’s rare, but it happens. So, when Eamon disappears and Rafe can no longer read his thoughts, he is still convinced he is alive because he hasn’t felt his death.

A quick note… the feeding that happens can be of a sexual nature to the person who is being fed from. It’s not necessarily the case for the Rin. The author presents a world in which it seems the characters are on a spectrum of sexuality, not unlike what one might call “gray” as in “gray asexuality”. I really loved the way that all the characters in the novel were accepting of the diversity within their groups! What a lovely world that would be to inhabit! Anyway…

The two main characters embark upon simultaneous battles on their sides of the “tear” that the reader learns is responsible for Eamon’s disappearance. In the original world, Rafe embarks upon a journey to track down one of the invading monsters and attempt to deduce how they are moving between worlds. He’s at such a loss without his partner that he’s single-minded to the point of almost not caring about himself.

There is a lovely friendship between Rafe and his friend/colleague, Kiran. While Rafe is bordering on acting irrational as he tracks and, ultimately, captures another monster, Kiran is at his side. With his partner gone, Rafe is left with the very real possibility of starving. As a last resort, he feeds from Kiran and it becomes clear how convoluted these type of feeding relationships could be. The Rin experience emotional/thought feedback when they are feeding and it is the ultimate in intimacy.

Meanwhile, on the other side of the tear, Eamon has been rescued by Beah. Beah is another interesting character. Beah fled his village and has been living alone in a cave when he stumbled across Eamon. The two team up to head back to Beah’s village in the hopes that there may be someone there who is able to help Eamon return to his home.

If this review seems a little odd, it might be because I’m trying not to ruin the plot for you! There are some interesting reveals and getting Eamon home is much more complicated than it may seem at first!

This book is packed full of fighty-monster action, wonderfully intriguing mysteries and a diverse cast of characters! I may be hopeful, but I think the end was set up in such a way that the author may be looking to write a sequel! I’d vote for that!!

The warnings bit: Please be aware, I’m by no means an expert on what may or may not have the potential to disturb people. I simply list things that I think a reader might want to be aware of. In this book: graphic scenes of gore, violence, and fight to the death with monsters, vivid descriptions of panic attacks, descriptions of injuries.

I received an ARC of Through the Tears by Leigh M. Lorien from NineStar Press via NetGalley in exchange for an unbiased review.