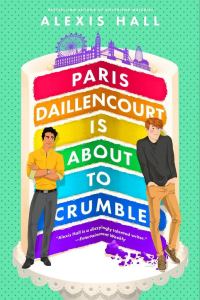 From the bestselling author of Boyfriend Material comes a sweet and scrumptious romantic comedy about facing your insecurities, finding love, and baking it off, no matter what people say.

Paris Daillencourt is a recipe for disaster. Despite his passion for baking, his cat, and his classics degree, constant self-doubt and second-guessing have left him a curdled, directionless mess. So when his roommate enters him in Bake Expectations, the nation’s favourite baking show, Paris is sure he’ll be the first one sent home.

But not only does he win week one’s challenge—he meets fellow contestant Tariq Hassan. Sure, he’s the competition, but he’s also cute and kind, with more confidence than Paris could ever hope to have. Still, neither his growing romance with Tariq nor his own impressive bakes can keep Paris’s fear of failure from spoiling his happiness. And when the show’s vicious fanbase confirms his worst anxieties, Paris’s confidence is torn apart quicker than tear-and-share bread.

But if Paris can find the strength to face his past, his future, and the chorus of hecklers that live in his brain, he’ll realize it’s the sweet things in life that he really deserves.

I read reviews sometimes when I’m about to write my own. I’m not sure why I do that, but I think it’s because I want to make sure I haven’t missed anything glaring. This time, while reading reviews of this book – I was annoyed at them. So many reviews felt the need to point out that Paris’ anxiety and being inside his “anxious POV” was exhausting. What’s exhausting is reading reviews in which people are annoyed by anxiety being accurately depicted.

This book is an extremely accurate representation of living with a severe anxiety disorder, and I think Hall does a fantastic job of capturing the mental agony that living with constant anxiety can bring.

Living with anxiety can make someone appear to be a “jerk” because they can be caught up in a hamster wheel of thoughts and emotions that can make them a challenge to be around.

What I liked about this book is that Hall has found a delicate path through this story without being too heavy handed. As someone who lives with anxiety, let me tell you – thoughts that are consuming and thinking I’ve said something that will be interpreted incorrectly are actual things that exist! I have had discussions with people that have made me go away and question whether or not I’m racist – because THAT is exactly what can happen to people with an anxiety disorder.

In addition to complaining about how “annoying” anxiety is, a lot of reviews were complaining about the casual racism that’s depicted in the book. Why? Casual racism happens all the time, constantly, to every visible POC. Of course, a person of color as unique and marvelous at Tariq is going to generate discussion and  a lot of it will be racist. That, people, is the world we live in. I work with a very diverse group of people, and they live with casual and overt racism daily. They also make jokes about it sometimes, can be very delightfully sarcastic and will challenge people when necessary. I see all of that being depicted in Tariq and I thought he was a delightful character.

“Three things.” Putting his empty plate aside, Tariq joined Paris on the sofa. “One, I am currently choosing to see this as adorable. If it continues much longer, I may not. Which leads us to two: this is going to get very tiring for me if I can’t mention my ethnicity or religion without you panicking. And three, no, you obviously shouldn’t know what my life is like because you’re not me and we’ve met exactly three times. I was just doing banter. I wasn’t trying to trigger your white guilt.”

“Oh you must have noticed,” Paris told him, trying not to think about how close he was now, “that my guilt comes pre-triggered.”

Tariq’s hand was on his arm again, the silver of his nails making the grey of Paris’s jumper seem especially. drab. “I’ll admit it took me a minute”

This kind of exchange amuses me and reminds me of my encounters with my friends. It’s not that  the author is taking the time to focus on racism – it’s that racism exists in a very real way  in the world.

On to the actual book! I loved this book. I’m a fan of Alexis Hall’s writing and always have been. It seems to be marketed as a romance, but I’d argue against that. I think romance is definitely second fiddle in this story. The plot revolves more around Paris’ anxiety, internalized homophobia and his struggle to interact with other people.

The baking contest part of the story is written with Hall’s typical sharp wit and fast-paced narrative. If you’ve watched the baking shows you will appreciate the fun that’s being poked. If you haven’t ever watched a baking show, that won’t detract from the plot. I’ve not read the first book in the “Winner Bakes All” series and that didn’t detract from my experience.

Having read all of Alexis Hall’s books, I find that I’m beginning to feel a bit as though I know what’s coming. There is always one main character who is a bit of a disaster and another who clearly has their life together. In this book though, the difference between the main characters is unique.

The end of the book doesn’t resolve at a HEA – so don’t go into the movel expecting that. Please do expect the great writing, fast pace, and humor that Alexis Hall’s books always contain.

DIDN’T WORK FOR ME

I think Alexis Hall is a talented author but I would really like them to change up the subject matter a little. Their earlier works were unique and quite remarkable in the romance genre. “For Real”, “Glitterland” and “Pansies” remain some of my favourite books in the genre.

I received an ARC of Paris Daillencourt Is About To Crumble by Alexis Hall from Grand Central Publishing via Netgalley in exchange for an unbiased review.