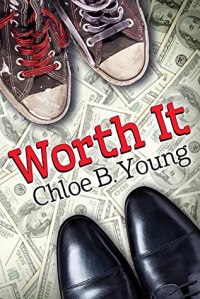 The Official Description: The price of love could be too high to pay.

Elliott Meyer is a dedicated student . . . and a part-time sex worker. College is expensive, and after his mother’s death left his family struggling, he’s desperate to avoid drowning in debt. Problem is, he just lost his only client. Time to hit the clubs and find a new benefactor before bills start piling up.

Enter Aiden Kent: rich, handsome . . . and the nephew of Elliott’s former client. Rather than letting this drive a wedge between them, Aiden offers Elliott an opportunity. Aiden’s stressed out and has no time for a relationship. He’s eager to hire Elliott to provide all the benefits of a boyfriend with none of the responsibility. And they both swear it’s only a little weird.

But when their business arrangement starts to become a full-on relationship, things get complicated. Elliott won’t accept money from a romantic partner, and Aiden won’t continue their relationship if Elliott’s sleeping with other clients. With his future on the line, Elliott’s left with a terrible decision: risk his bright academic future, or lose Aiden forever.

Elliott is a part-tie sex worker putting himself through college. A financial arrangement with lawyer, Aiden Kent seems like a reasonable choice. The problem is that Elliott’s emotions quickly get involved.- Kinzie Things

My thoughts bit: This is the first book of Chloe B. Young’s that I have read, and I believe it is a debut novel. It’s a “Pretty Woman” type of story and definitely has the same vibe as the film.

Elliott has been working part-time as a sex trade worker. He’s putting himself through college and attempting to help his father save their family house. He takes a lot of pride in “making his own way” and doesn’t feel as though there’s anything wrong with what he does. After leaving a long-term arrangement with one man… he ends up beginning another arrangement with that man’s nephew.

I have to admit, I struggled a little bit with the fact that Elliot dated a man, and then that man’s nephew. I sort of tried to put it out of my head because it made me a little uncomfortable. In contrast to the original arrangement, when Elliott meets Aiden, he is quite taken with him.

Aiden comes from a wealthy family and is a lawyer. Right from the beginning, Aiden is a gentle character. He seems honest, forthright, and what he wants is someone he can pay to act as though they’re in a relationship. He genuinely wants the cuddling, the Netflix and chill, the laughter… and doesn’t want to have to go through all the effort to find someone.

As these two men begin their arrangement, it’s clear that they have physical chemistry. The thing is, very slowly, a relationship begins to sneak up on them. Of course, this is a bit complicated because of their financial agreement. I was pleasantly surprised that the characters didn’t immediately panic and end their agreement. It was a nice change of pace to read about two people discovering they were developing feelings and taking it in stride.

Aiden was definitely my favorite character. I felt as though he was the more likable of the two mains. Aiden came across as quite genuine… while Elliott was more difficult for me to warm up to. I struggled with understanding why Elliott had to be a sex worker in the first place. Not that I have an issue with a character making their money by sex work, but it seemed as though there were a wide variety of things that Elliott could have chosen as a job.

Overall, I enjoyed this novel and I’m curious to see what this new author does in the future!

Things You May Want To Know: Please be aware, I’m by no means an expert on what may or may not have the potential to disturb people. I simply list things that I think a reader might want to be aware of. In this book: (SPOILERS) Family issues, mentions deceased parent, sex work begins at age 19

I received an ARC of Worth It by Chloe B. Young from Riptide publishing via NetGalley in exchange for an unbiased review.