Book Title: A Summer of Smoke and Sin 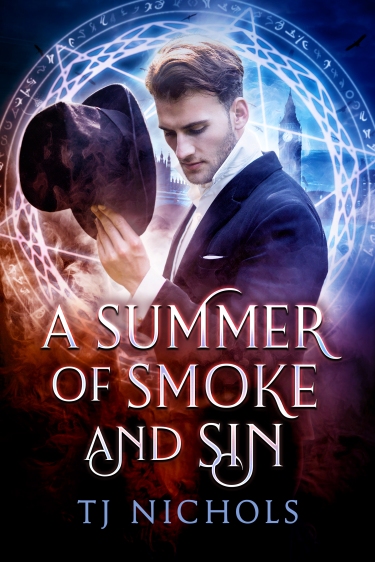 Nathanial Bayard wants nothing more than to find the nobleman creating snuff pornography. If he fails, his career in the recently formed nobility task force will be over and as the youngest son he’ll be forced to obey his father and join the church. But a life of celibacy doesn’t appeal. Nathanial has never even kissed another man, fearing for his soul and his reputation.

Jericho Fulbright has never lived a wholesome life. After behavior unbecoming he was discharged from the army and sent home in disgrace. His inventor and nouveau riche father refused to have anything to do with him, so Jericho turned to what he knew best: opium, gambling and sex.

As the owner of the Jericho Rose, a club for gentlemen who like men, he enjoys a certain notoriety. Some would say he has a golden tongue, but the truth is a succubus lives within him feeding on souls. Once he needed her help, now she is a burden that keeps him from getting close to anyone.

After the unfortunate death of a young nobleman in Jericho’s bed, Nathanial is sent to investigate. He is scandalized and intrigued by Jericho, but soon realizes that Jericho could be exactly who he needs to help break the snuff case. Together they are drawn into a web of lies that will result in Jericho facing prison unless Nathanial can unmask the real creator of the snuff, a man with rank and privileges that reaches almost to the King.

“Are you out of your mind?” Jericho paced the dining room floor. He poured himself a brandy and drank it just as fast. He should’ve taken Nathanial to his study, where privacy could be assured, but after the death of Stephan and the way Eulalia had tried to take over last time Nathanial got close, he didn’t trust himself to be alone with Nathanial. “I am not going to some country party.”

He had nothing to wear for a start. His wardrobe was for evening events, not picnics. There would be picnics at some point, he was sure of it.

“It’s not a big thing, just dinner and dancing. A ball.”

That was worse. Polite conversation with puffed up men whose biggest source of pride was how much they’d inherited from their father, and women who knew how to assess a man’s funds and his character with a single glance. “I don’t dance.”

Jericho smiled. Few ever said that to him. Most nodded their head and believed any lie he told. “Fine, I can dance.” The man he’d once been a companion to had liked to put on his gramophone and dance when his gout allowed it. He had been most thrilled about the idea of a place where men could associate more freely; he’d loved the club in its earlier incarnation. “But I don’t want to go. My life is here. I have a business to run in case you haven’t noticed.”

Nathanial had stayed well away from the smoking room this time, to Jericho’s relief. He didn’t want Nathanial to surrender what he held onto as dearly as a maid with good marriage prospects. He might be the youngest son, but Nathanial could still marry well.

“One night. We don’t even have to spend the night.” Nathanial held up one finger to reinforce the point. “Your father and step-mother will be there.”

Jericho rocked back onto his heels. He hadn’t seen his father in many years and even then, it had only been in passing. Jericho had been in uniform before leaving for Hong Kong and his father hadn’t recognized him. At the time, it had hurt. What kind of father doesn’t know his own son?

His father wouldn’t know him now. Only once a clever gossip realized there were two Mr. Fulbright’s in the room would his father look in his direction and then there would be a kerfuffle. “That is not a feature the changes my mind to the positive.”

“The killer will probably be there, too.”

“No. But wouldn’t it be grand if he was and we were able to identify him?”

While Jericho would be able to do that in a very short conversation—no one could bury that kind of darkness completely no matter how hard they tried—how did he explain that to Nathanial? And if it was another demon, what then? They both killed, but where Jericho kept it secret, that man made it public as though he reveled in it. Perhaps the demon had full control.

“And without evidence, how do you get a conviction? A scar will not matter in a court.”

“Search his house and estates. If we know who it is, we can close the net around him.”

Jericho had seen too many criminals slip away. Money bought a presumption of innocence. He ran his hand over Nathanial’s hair, then kissed his forehead. “For all that you were raised with the foxes you do not behave like them, so you fail to see them as the predators they are.”

Kiss his mouth, you fool. I can help him. Let me find the man he wants, Eulalia hissed. I can stop the murderer from killing again.

The desire to kiss Nathanial on the lips was part his own and part hers. Jericho pressed his lips together, but that didn’t stop the hunger. Eulalia was right. It would be better for the case if he passed her on, but that would mean corrupting Nathanial and he couldn’t do that. He doubted Nathanial would want a demon, and he’d want Jericho less if he knew about Eulalia and the price of keeping her fed.

Urban Fantasy where the hero always gets his man

TJ Nichols is an avid runner and martial arts enthusiast who first started writing as a child. Many years later while working as a civil designer, TJ decided to pick up a pen and start writing again. Having grown up reading thrillers and fantasy novels, it’s no surprise that mixing danger and magic comes so easily. Writing urban fantasy allows TJ to bring magic to the everyday. TJ is the author of the Studies in Demonology series and the Mytho urban fantasy series.

With one cat acting as a supervisor, TJ has gone from designing roads to building worlds and wouldn’t have it any other way. After traveling all over the world TJ now lives in Perth, Western Australia. 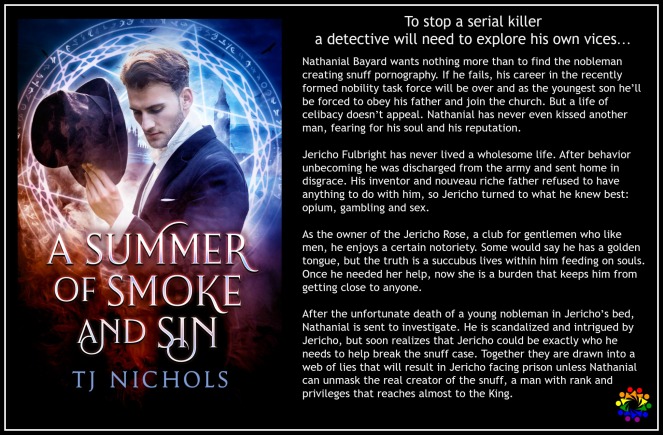 My thoughts bit: I wasn’t sure what this book was about when I got the ARC. Honestly, I was originally drawn to it by the cover. I like really colorful covers with great graphic design. For certain, this time I could absolutely judge a book by its cover! I really enjoyed A Summer of Smoke and Sin by T.J. Nichols.

Nathanial Bayard is a detective tasked with chasing down a serial killer. For some reason, all of his cases seem to fall apart before he’s able to obtain a conviction and he’s beyond frustrated. When it comes to a serial killer who is not only violent and demeaning…but brazen – Nathanial is more motivated than ever to get the job done.

In the society that Nichols has created, male marriage has just been made legal. The issue is that it still has some negative connotations attached to it for some families. I really liked the world the author built up. I enjoyed the way the societal changes were still new and it was obviously unsettling for some of the characters.

Nathaniel is caught in a terrible bind. If the serial killer slips through his fingers he will lose his job. If he loses his position in law enforcement he’ll have no choice but to join the church as his father wishes.

Nathanial is a beautifully complex character. He’s troubled by so many things. His own sexuality has him fearing for the safety of his soul. He’s never even kissed another man, but he knows that is what he wants. There’s also an underlying tension between Nathanial and his father… circumstances being what they are… Nathanial needs to protect his beloved sister by not garnering his father’s anger.

And then there’s Jericho. Jericho runs a club for gentleman who enjoy the company of other gentlemen. Jericho was once a military man but was he was discharged for behavior unbecoming. His father disowned him and he completely lost touch with his family before settling back on something he knew… a club for men like himself.

He’s a flamboyant character in his society. He dresses inappropriately, accepts his sexuality… and he is the host to a demon that allows him special powers. The demon has helped to propel Jericho through life, assisting with avoidance of difficult situations and keeping him right where he wants to be in Society.

Jericho pays a high price for the skills of the demon within him. One morning, he wakes up with a beautiful, young lover in his bed… deceased. This is what brings about the meeting of Nathanial and Jericho.

There are several things about this book that I really enjoyed. As I wrote before, the societal structure was particularly interesting to me. The author did a great job of describing this world so that I could be fully immersed in it while I was reading.

The characters were all great. My favorite character was Nathanial. He was sweet and caring, fully committed to finding the killer. I loved the relationship that he had with his sister, Margaret. Margaret had fought her way free from the confines imposed upon her because she was born a woman… and she is Nathanial’s fiercest supporter. She’s the only one who cares about her brother’s well-being to the point that she will speak frankly to him and fight for him.

The verdict is that I really enjoyed this novel. I know that I haven’t gone into a lot of detail in this review but I don’t want to spoil the intricacies of the plot for anyone who might read it. The mystery is solid and engaging, the characters are endearing and interesting.

All in all, a great read!

Things You May Want To Know: Please be aware, I’m by no means an expert on what may or may not have the potential to disturb people. I simply list things that I think a reader might want to be aware of. In this book: (SPOILERS) homophobia, descriptions of murder scenes, description of dead bodies, possession by an entity (consent issues regarding sexual encounters under the influence), death of supporting characters (off-page), blackmail.