The Official Description: Five Weddings and a Fake Boyfriend

City slicker Derrick Massey has always had a thing for cowboys. So a roll in the hay with Kendall “Slater” Stamos during a rustic weekend wedding is more than A-OK. But when Slater’s forced to hang up his saddle for the season, Derrick surprises even himself with his proposition: be my fake boyfriend and get my family off my back about finding a permanent partner.

Though unexpected, the arrangement is a win-win. Derrick gets a plus-one for a slew of summer weddings and Slater gets a place to stay while he recuperates…with lots of casual fun in between. Which is just how the sexy cowboy likes it: casual. Yet it’s obvious the chemistry between them is anything but.

With the countdown to their “breakup” on, the more time the two men spend together. And the more it becomes clear that what they have could be real, if only they let it be.

This book is approximately 83,000 words

One-click with confidence. This title is part of the Carina Press Romance Promise : all the romance you’re looking for with an HEA/HFN. It’s a promise!

Back at the Clean Slate ranch, Slater and Derrick have what’s supposed to be a one night encounter. But maybe, they can help each other out. – Kinzie Things 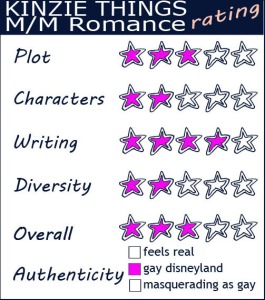 My thoughts bit: This is my second go with Clean Slate Ranch. I really like the premise of the ranch.. a place where people can go to put the past behind them and move on.

In this book, Derrick is at the ranch for a wedding when he has a late-night encounter with ranch-hand, Slater. It’s hot and fun and when it’s over Slater pretty much just walks away. Before Derrick leaves the ranch there’s a terrible accident and Slater is left unable to continue working for a few months while he recovers.

This is where the fun part comes in. Derrick and Slater strike up a deal. They will be “pretend boyfriends” for the time-span of the weddings that Derrick has to go to over the next few weeks. That will keep Derrick’s family quiet! After all, he’s the only one left single and a very eligible bachelor.

Over the course of their living together, Slater and Derrick both develop feelings for one another. Naturally, they don’t say anything about it. It’s funny that they don’t communicate well, because my issue with the other book I read in this series was that the character talked about absolutely everything! These two were frustrating for the opposite reason. They clearly felt things but didn’t talk about it. Slater had rather a lot going on in his past that he flat out refused to tell people even though it was the kind of stuff that really should have been out in the open.

Overall the story is good. It’s a common trope in romance books but I’m always up for a fake-boyfriend. I really liked the relationship between Slater and his daughter – it was sweet and endearing.

Things You May Want To Know: Please be aware, I’m by no means an expert on what may or may not have the potential to disturb people. I simply list things that I think a reader might want to be aware of. In this book: (SPOILERS) child in danger, description of severe injuries from cliff fall, hospitalization, character hides things about past, father who is not in his child’s life.

I received an ARC of Hard Ride by AM Arthur from Harlequin Carina Press via Netgalley in exchange for an unbiased review.