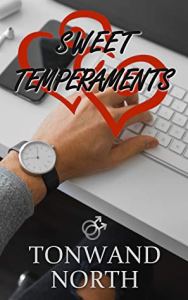 The Official Description: Lewis Fraser is in trouble. He’s fallen hopelessly for eccentric recluse Christopher Wright. But the man won’t even say good morning to him! Yet no matter how many times he tries to break his one-sided attraction, one look from Christopher and his heart is racing all over again.

Struggling to hold the threads of a friendship together, Lewis highly doubts there’s any parallel universe in which Christopher and him are in a relationship! But he’s still determined to melt the ice and get to know him better. What Lewis doesn’t realise is that Christopher Wright intentionally avoids others for a reason. How will he handle Christopher’s secret?

This is a quirky, sweet and angsty romance. Really unusual characters that I grew to love – Kinzie Things 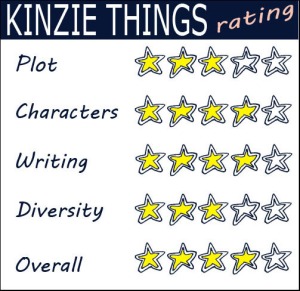 Tonwand North is another new author for me and I found this book to be quite enjoyable.

The novella begins with Lewis and Christopher sharing an office at work. That might not seem all that interesting, but goodness these two characters were fun.

Christopher is standoffish to the point of being rude. He doesn’t speak to his office mate, he eats his lunch alone and seldom makes eye contact.

Lewis, on the other hand, is out at work, sociable and has developed quite a crush on Christopher.

Lewis commits a fair amount of effort to trying to overcome the crush he’s developed on his office mate. Some of his attempts at ridding Christopher from his mind are comical. He googles how to get over someone. He tries negative reinforcement and pinches himself every time he thinks about Christopher. He even accepts a blind date from his friend, Brian at work. Of course, none of that matter every time he meets Christopher’s gaze.

This story is told in first person which I’m normally not that fond of but North has really made it work in this novella. I was intrigued to be sticking with Lewis point of view and to be kept as “in the dark” about Christopher as he was.

Okay here come the spoilers! You know the drill!!!

The reason that Christopher is so antisocial is because he is HIV positive and is convinced that he will die. He knows about the recent advances in medication, but doesn’t seem to think that he will be able to survive. He also is desperately afraid of passing the virus on to anyone else. I found his reaction to be a little severe – I mean, I know that many people think of HIV as a death sentence at first but it’s far from that these days.

I was quite invested in the friendship that developed between these two men. Christopher opens up very slowly about his illness. Oh! and I loved the way he first told Lewis…but handing him a handful of pamphlets. (I actually used to work with people living with HIV and that’s a technique I know has been used!). The two of them work together to try and get to a place at which they are both comfortable. There are some scares, of course there are, but ultimately they are able to meet somewhere in the middle.

Overall, this was a great story. There sex scenes aren’t explicit, and they are well-written. I did find the end to be a little bit rushed. There were some really sweet and emotional scenes that happened later in the book and I was enjoying them and was disappointed that they weren’t a little bit longer.

Be aware, although there is a happy ending, there is a fair amount of angst and a bit of sadness in this novella.

Things You May Want To Know: Please be aware, I’m by no means an expert on what may or may not have the potential to disturb people. I simply list things that I think a reader might want to be aware of. In this book: (SPOILERS) Beloved family pet dies, person diagnosed with HIV, possible exposure to HIV and resulting anxiety, death of family members mentioned

I received an ARC of Sweet Temperaments by Tonwond North from the author in exchange for an unbiased review.