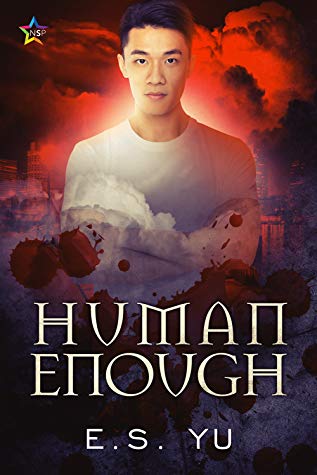 The Official Description: When Noah Lau joined the Vampire Hunters Association, seeking justice for his parents’ deaths, he didn’t anticipate ending up imprisoned in the house of the vampire he was supposed to kill—and he definitely didn’t anticipate falling for that vampire’s lover.

Six months later, Noah’s life has gotten significantly more complicated. On top of being autistic in a world that doesn’t try to understand him, he still hunts vampires for a living…while dating a vampire himself. Awkward. Yet Jordan Cross is sweet and kind, and after braving their inner demons and Jordan’s vicious partner together, Noah wouldn’t trade him for the world.

But when one of Jordan’s vampire friends goes missing and Noah’s new boss at the VHA becomes suspicious about some of his recent cases, what starts off as a routine paperwork check soon leads Noah to a sinister conspiracy. As he investigates, he and Jordan get sucked into a deadly web of intrigue that will test the limits of their relationship—and possibly break them. After all, in a world where vampires feed on humans and humans fear vampires, can a vampire and a vampire hunter truly find a happy ending together?

A novel full of diversity, action and intrigue. – Kinzie Things

My thoughts bit:  I was immediately drawn in by the main character in this novel. Noah Lau is a wonderfully diverse character in a variety of ways. He is Chinese-American, he lost his parents when he was very young, he’s pansexual, he is autistic and oh yeah, he’s a vampire hunter!

Through a series of flashbacks, Yu reveals the history of the two main characters – Noah and Jordan. How did they meet? How did they become a couple? What happened to make them both the people they are? As usual, I won’t give any of that away. I appreciate the way E.S. Yu wove the past and the future together to reveal bits and pieces of the past. As a reader, I felt as though I was getting to know these two main characters in real time and it was lovely.

There is some wonderful writing in this book about what it’s like being autistic. Noah explains himself and his challenges a couple of times in the novel and it’s really educational as well as very authentic sounding. It was a real treat to see a character with autism … living. Sure, Noah has challenges and difficulties, but the reality is that we all do. We all have different struggles and challenges and what we need to give each other is the time to speak. I’m probably not being very clear about that… but I loved Noah.

I also loved Jordan. It’s not often that I read a vampire-character and find him to be one of the most human characters I’ve ever read. But that’s true of Jordan… in the sense that “Human” just means he is caring and open. The way he learns from Noah about Autism is remarkable… and I wish we lived in a world in which everyone could be the same way. Jordan is gray-asexual and … being a 90-year-old vampire has made keeping up with the world’s changes rough.

There’s a great twist of “our world” mixed into the world-building in this story. I loved that Yu worked in the anti-vax movement and support groups… it gave the novel a more realistic feel.

There’s action in this novel… beyond anything else, it’s a story about fighting for your life.

Things You May Want To Know: Please be aware, I’m by no means an expert on what may or may not have the potential to disturb people. I simply list things that I think a reader might want to be aware of. In this book: (SPOILERS) Ableism, racism, homophobia, bigotry, murder, death.

I received an ARC of Human Enough by E.S. Yu from Ninestar Press via NetGalley in exchange for an unbiased review.