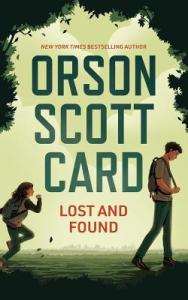 The Official Description: That’s the question that has haunted fourteen-year-old Ezekiel Blast all his life. But he’s not a thief, he just has a talent for finding things. Not a superpower–a micropower. Because what good is finding lost bicycles and hair scrunchies, especially when you return them to their owners and everyone thinks you must have stolen them in the first place? If only there were some way to use Ezekiel’s micropower for good, to turn a curse into a blessing. His friend Beth thinks there must be, and so does a police detective investigating the disappearance of a little girl. When tragedy strikes, it’s up to Ezekiel to use his talent to find what matters most.

My thoughts bit: What if you had a super-ability that seemed completely useless? What if that ability got you in trouble with the law because of your honesty? What if your super-power isn’t super so much as… annoying? Welcome to the life of Ezekiel.

Ezekiel is a finder of lost things. The things he finds have to be inanimate objects so he spends a part of his youth collecting hair scrunchies, pencils, backpacks, buttons and an inordinate amount of everyday items. of course, returning those items to the people who have lost them means that he finds himself in trouble constantly. How is it that he finds so many lost things? Unfortunately for Ezekiel, he ends up living the isolated life of a teenager who is thought of as a thief. The world has it wrong, but that doesn’t help Ezekiel.

When Ezekiel was young, he was doted upon by his mother. Sadly, she was hit by a car and killed when he was four years old. Of course, that changed Ezekiel’s life. But, more importantly, it was the beginning of his realization that people aren’t lost. According to Ezekiel people aren’t lost because they either know where they are, or they’re dead.

This snarky, intelligent teenager is living a very lonely life until he meets short-middle-school girl Beth and then a police officer who actually believes him. What if Ezekiel can actually find lost people?

Like all of Card’s writing, this book is peppered with marvelously sharp dialogue. The snark can get a bit over-the-top at times, but it’s fun. There’s also signature darkness that is often reflected in the younger characters in Card’s writing.

The warnings bit: Please be aware, I’m by no means an expert on what may or may not have the potential to disturb people. I simply list things that I think a reader might want to be aware of. In this book: the death of a parent, descriptions of a vehicular accident, bullying

If/Then: If you liked these books, you will probably enjoy this one!

I received an ARC of Lost And Found by Orson Scott Card from Blackstone Publishing via NetGalley in exchange for an unbiased review.