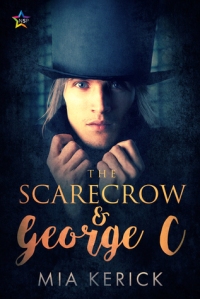 The descriptive bit: Van Liss is a senior in high school, dresses like a scarecrow and spends his days continuing to cultivate an untouchable barrier around himself. His disconnected mother and her abusive boyfriend are responsible for the way Van has to live his life: unreachable and indestructible. Then George C. begins working at the same diner as Van. He isn’t put off by Van’s cold demeanor, in fact, he seems curious… and he seems to care.

As the two young men get to know each other, they must deal with the past behind each of them and find a way to a future that may be out of reach.

My thoughts bit:  Oh Van. What a poor, lost soul this character is. Okay, maybe that’s an exaggeration, but I really cared about this kid from the beginning. This book is lovely in that it begins with Van himself is writing the story for a little while. At the beginning of the novel, he speaks directly to the reader, letting us know about the story he’s going to tell. He is candid and sharp, witty and clearly, he has been hurt. His past has turned him into the creature he is and the young narrator doesn’t pull any punches when discussing how he moves through the world.

I think I felt a lot for Van because of the way Kerick has built his character in the novel. Because he is such a loner, a lot of the first part of the novel is the reader and Van alone with his thoughts. He hasn’t really had any loving connections to anyone and this has left him lost at sea in terms of friends.

George C. has taken a different path to the diner where he befriends Val, but his journey was no less traumatic. He’s done things he isn’t proud of, wears them like a stain on his skin and struggles for everything. But, he’s also kind-hearted, sweet and wants to be worthy of someone as special as Van.

I really enjoyed the time these two spent getting to know each other. There was a lot of push and pull in their relationship and they seemed to be able to disarm each other without really even knowing they were doing it. I think that they were to each other the kind of friend we all really want to run across: someone who sees us.

This story is difficult to read at times, often amusing, sad and frightening and sometimes it’s all of those things at once.

I loved it. If you’ve ever been lost or felt really alone you may find a kindred spirit in these two characters.

The warnings bit: Please be aware, I’m by no means an expert on what may or may not have the potential to disturb people. I simply list things that I think a reader might want to be aware of. In this book: mentions sexual assault, mentions prostitution, bullying, living on the street, violence.

I received an ARC of # by # from # via NetGalley in exchange for an unbiased review.