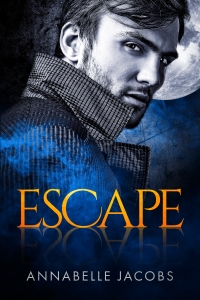 The Official Description: This isn’t the life Cole dreamt of, but what choice does he have?

With his twenty-third birthday behind him, Cole Moreton now faces the shifter compatibility test which will decide his future. Testing positive means joining a pack and eventually taking the bite. Unfortunately, with enviable skills in self-defence and hand-to-hand combat, the kind of packs interested in him aren’t any he’d want to join.

Logan has been a member of the McKillan pack for most of his life. Pack is family and loyalty is everything, but when the shifter government turns out to be no better than the oppressive humans before them, he questions everything.

Right from their first meeting, Logan knows that a life with the McKillan pack isn’t right for Cole, but with his alpha taking a keen interest in Cole’s skills, Logan’s hands are tied. Mutual attraction builds between them, but acting on it is futile—helping Cole will put their lives at risk and an end to any future they could’ve had.

A fast-moving, shifter romance full of intrigue and action!

My thoughts bit: 23-year-old Cole has just tested positive for the ability to potentially become a Shifter. The problem is that he doesn’t want the change, nor does he want the attention that his potential, combined with his martial arts training is getting him from the powerful McKillan pack. Logan is the recruiter from the McKillan pack and he isn’t quite what Cole expects… even that doesn’t change his feelings though.

This is a creative take on the world of wolf-shifters. The shifters were voted into power in the UK … and what people wanted was a joint-government run by both shifters and non-shifters. The outcome of the election was very different. Once the shifters were in power…they took over. I enjoyed the idea that a shifter government would screen people for their “suitability” to “receive the bite”. It seems believable while still staying int he paranormal world.

When Logan offers Cole an … escape … things get more serious. The escape doesn’t go as planned and the two men find themselves on the run. This was an exciting book, full of interesting characters! I’m so glad that this is the first book of a series because it made the ending much easier to accept. I don’t want to spoil it for any potential readers…but not everything is resolved. It’s not left hanging though, it’s more of a new-beginning.

The attraction between Cole and Logan is very intense and I loved it. Logan was fierce and gentle and clearly wanted Cole from the first moment they met. It worked for me!

Can’t wait to read the rest of this series!

The warnings bit: Please be aware, I’m by no means an expert on what may or may not have the potential to disturb people. I simply list things that I think a reader might want to be aware of. In This book: (SPOILERS) mention of past suicide, bigotry, vivid depiction of torture, gunshot wounds, injuries, near death, descriptions of deaths and dead bodies.

Readalikes: Other stories that are similar or give the same feel

I received an ARC of Escape (Rebellion #1) by Annabelle Jacobs via Signal Boost Promotions in exchange for an unbiased review.

Annabelle Jacobs lives in the South West of England with three rowdy children, and two cats. An avid reader of fantasy herself for many years, Annabelle now spends her days writing her own stories. They’re usually either fantasy or paranormal fiction, because she loves building worlds filled with magical creatures, and creating stories full of action and adventure. Her characters may have a tough time of it—fighting enemies and adversity—but they always find love in the end.