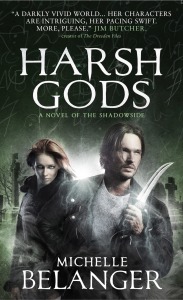 I thoroughly enjoyed “Conspiracy of Angels” by Michelle Belanger so I was delighted when I received a copy of “Harsh Gods”. This novel is a “Novel of the Shadowside  and the second book about Zack Westland. Zack is an angel. He’s not the kind of angel you might expect in a novel, in fact, he’s probably the most interesting angelic character I’ve ever encountered.

In the first book, Zack woke up with no memory of who he was or what kind of life he had lived. With nothing but a business card as a “clue” Zack begins to try to unravel his life. There are times when Zack wonders if he would have even liked himself as he discovers some of the more questionable things he has been a part of.

“Harsh Gods” begins with Zack firmly entrenched in some kind of reclusive depression. He’s holed up in his condo playing video games and eating take out food. In short, he’s a mess, but that’s not terribly surprising. His memory is still like Swiss cheese and he can’t seem to rely on any of his “friends” to be consistently good or evil.

When a petite teenage martial artist shows up at Zack’s door requesting his help he is reluctantly pried from his safe haven. It turns out that his presence is being requested by a Priest. Father Frank seems to know everything about Zack – including the fact that he’s an angel – and that’s more than a little unnerving. The problem is that Zack can’t remember more than a fleeting image of Father Frank’s face.

The Priest, it turns out, is an exorcist and he’s dealing with a young woman who is Autistic. She’s barely managing to hold her own against a spiritual assault. Zack, it seems, must have some kind of experience in his vague past that involved working with the Priest to help exorcise demons and the like.

It’s more complex than just a demon – who would have thought there would be a universe where “just a demon” was even a phrase. Zack recognizes that the being attempting to posses the girl might be of his own ilk and that’s very bad news.

This book has lived up to my expectations. The first installment was a dark thrill-ride through a scary supernatural world. The second installment is the same. In spite of Zack’s constant pop culture references and his caustic banter with his cohorts – this book seems darker. It’s still a thoroughly enjoyable read and I can’t wait for the next installment.

You don’t need to have read the first part of the trilogy to enjoy “Harsh Gods” but it will help. There are a few references to what happened to Zack on his initial journey from the waters of Lake Erie. It’s worth going back to read if you want to catch up – you won’t regret it.

My review of the first novel is here: Conspiracy of Angels

The last thing Zack Westland expects on a frigid night is to be summoned to an exorcism. Demonic possession, however, proves the least of his problems. Father Frank, a veteran turned priest, knows Zack’s deepest secrets, recognizing him as Anakim, an angel belonging to that hidden tribe. And Halley, the girl they’ve come to save, carries a secret that could unlock a centuries-old evil. She chants an eerie rhyme, and she isn’t alone…

“HANDS TO TAKE AND EYES TO SEE.
A MOUTH TO SPEAK. HE COMES FOR ME.”

As Zack’s secrets spill out, far more than his life is at stake, for Halley is linked to an ancient conspiracy. Yet Zack can’t help her unless he’s willing to risk losing his immortality—and reigniting the Blood Wars.