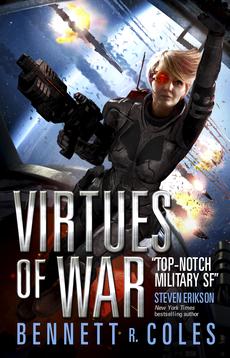 “Virtues of War” is a forthcoming Military Science Fiction book by Bennett R. Coles.  This clever and fast-moving novel is set one of Earth’s possible futures. There are many possible conflicts ready to explode and the people on the front lines display very human characteristics.

While not a political story, this novel definitely manages to explore the good, bad and horrifying things that result from war and our involvement in it.

When I picked up this book I was surprised by how fast the action came! In the first pages of the book I followed greenhorn Lieutenant Katja Emmes as she headed off in a strike pod to take on a mission based on new intelligence. She has a lot of theory and training but she’s never actually been engaged in any kind of warfare. Very quickly Coles lets us know just how affected Katja is by the death and destruction that ensues as she tries to uncover some weapons smuggling between Terran colonies..

When Katja returns to the Rapier – the cutting edge ship that she’s been assigned to – she is maligned by Lieutenant Charity Brisebois aka. Breeze. It’s the more experienced advice and reaction of Lieutenant Commander Thomas Kane that provides Katja with some comfort. As the commanding officer of the Rapier, Thomas is familiar with the difficult of making decisions during intelligence ops – but he has an ulterior motive. As a man who is just getting to the point in his career when he is hoping for advancement and promotion, Thomas knows the value of letting the younger officers take some of the blame when things go sideways.

The original mission that Katja has little success on seems to be the spark that fires up a major conflict. Almost immediately the characters find themselves at war. There are no one-dimensional characters in this book; there’s no clear villain or saviour. The characters, like most of us, have good and bad qualities – they make mistakes and they are often brave and daring.

Talk about hitting the ground running. Coles doesn’t pull any punches.  There’s no glamorization of war or battle – what this story provides is a clear and intelligent depiction of human beings and all the coping mechanisms that they develop to deal with the trauma and stress that can result from war. The fast-moving pace of the story is terrific and makes it an absolute pleasure to read.

You can pick up a copy of this book on June 30 from Titan Books. Don’t give it a miss if you’re a fan of the Military Sci-Fi genre. Coles is a leader.

The Terran military, the Astral Force, launches a mission to crush a colonial rebellion on the Centauri colony. Although Expeditionary Force 15 succeeds, the surviving veterans remain scarred—physically and emotionally, and the consequences of their actions follow them back to Earth when terrorists seek to exact catastrophic revenge.

Lieutenant Katja Emmes is a platoon commander, leader of the 10-trooper strike team aboard the fast-attack craft Rapier. Although fully trained, she has never led troops in real operations before, and lives in the shadow of her war-hero father. sub-lieutenant Jack Mallory is fresh out of pilot school, daydreaming about a fighter pilot position in the space fleet. He is in for a rude awakening.Lieutenant Commander Thomas Kane uses a six-month deployment in command of Rapier is to secure his rise to stardom within the Astral Force. He also plays the subtle politics of the military.