Kim Rhodes: I Just Have Me 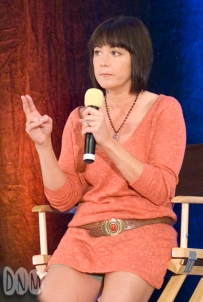 Kim Rhodes was the first guest to appear onstage at the “Salute to Supernatural” Creation Convention this past weekend in Vancouver. It’s a tough spot, opening the convention, it’s tougher when you’re one of the handful of female actors who get invited.

The thing about Kim Rhodes though, is that fans like her. The room was packed and there was an excited buzz in the air.

It was twitter that did it. Shortly after her first convention appearance, Kim got on twitter and seemed quite shocked that people wanted to follow her. Never underestimate the strength of the “Supernatural” family bond.

140 characters worked pretty well for Kim. She’s witty and funny and above all has a type of candor that is rare these days. She says what she thinks and you get what you get. Kim embraced the fandom full on. She did interviews, met up with fans, went to more conventions and her twitter followers grew.

Then Kim decided it was time to write a blog: “Rhodeside Attractions: For Things Along The Way” isn’t for the faint of heart. It’s fresh and honest and sometimes, sad; it’s always frank. The most important thing about “Rhodeside Attractions” is that it’s familiar to many of it’s readers. If you want to know what people think of Kim’s blog just read some of the comments.

“I feel like you’re a big sister who is sharing her life lessons with me every time I read your blog.” – Chelsey

“You’re amazing. That is all” – Stacey

“You are bloody amazing for sharing. Through you, a lot of us who don’t write get to work through our own shit, while also deconstructing the myth of celebrity and becoming a fan of you as a fantastic human being. It’s a very cool thing.” – Erica

Sadly, there’s no word on whether Kim’s character, Sheriff Jody Mills, will return in Season 8 of “Supernatural”. There’s no shortage of fans tweeting the crew of the show and sending letters to the writers to let them know that they want “Sheriff Mills” back.

After her stage appearance I was able to catch Kim for a few minutes of interview time.

char: What are you doing?

KIM: What am I doing? I’m lookin’ for work! I’ve got a kid who’s just started kindergarten and it’s crazy how much life changes in terms of the pressure I now have to be a good parent. I would not have thought that I put a lot of pressure on myself to conform to Society’s norms but when it comes to what’s best for my kid I have a lot of doubts about myself.

It’s really easy for people to be like, “oh, you she’s got dadada, oh she’s- oooh yeah she needs…” – and I’m thinking “Okay! I’ll get her in karate right away! Montessori! Public! I don’t know! Jesus Christ! I can’t even cut her bangs right!”

KIM: It is! They don’t teach you this shit. There should be classes and tools and stuff. 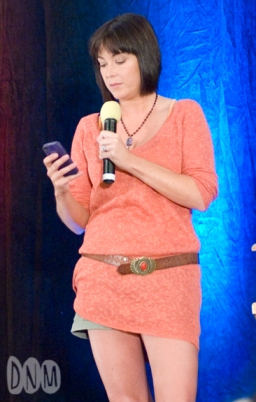 DNM: So who would be a better parent to your daughter Carey [from The Suite Life of Zack and Cody] or Jody [Sheriff Jody Mills on “Supernatural”]?

KIM: Oh Carey. ’cause Jody would shoot her. I think Jody is probably a little more of an authoritarian and my child is a free-willed force of nature. She’s been there [at kindergarten] a week and I’ve already had a parent/teacher conference requested. The teacher was so cute, she’s got a Scottish brogue; she said, “I don’t want to use the word defiant…” and I said, “Oh no. You can go right ahead and use the word defiant. I know what you mean.”

KIM: You know what? I’m not though. I have this – it may come from my upbringing – I have this very primal need for approval. When I moved into my defiant stage it was out of rage for not being approved of. It was kind of like, “really? You’re not gonna make me feel good about myself? Well then, fuck you, I’m gonna scare you!”

My daughter really, truly, doesn’t comprehend why if she wants something that’s different from what I want – why my needs should matter to her at all. And the teacher says it’s supremely confident of her whereas my kind of defiance comes from a lack of confidence. When I’m truly my confident, present self, it’s a lot easier to get me to do what you want me to do. ‘Cause I’m like “Alright, well, if that’d be easier for you…I lose nothing by doing it.” Whereas my daughter is just full-on, “No. I fuckin’ feel like gettin’ up, goin’ to the water fountain, taking a mouthful of water and spitting it on my desk right now. ‘Cause I wanna see what you’re gonna do. Bring it!” And she’s four and a half.

char: Okay. This is a tougher question: When you’re standing onstage at the convention and you’re looking out at an audience that’s prominently women and so many of them (I read the comments on your blog) admire you, and just think you’re a crazy inspiration. How does that make you feel?

KIM: Weird! Because whenever I write something…no matter how many times I get that response of “Oh my God! Me Too!”, “Oh my gosh, both of us!”, “Oh my gosh, oh my gosh.” No matter how many times I get that response – every single time I put something down on paper I feel like I’m the only one and I’m a freak and I’m wrong and I’m stupid. So that’s why this blog is part of my practice is to just keep owning it, and keep honoring it and keep putting it out there. At some point I’m gonna figure out that if I feel shame and guilt and weirdness and freakishness around this thing that is actually really universal, then maybe none of us should be feeling shame and guilt and weirdness and instead we should all just go, “This is a reality. How do we all get through it?”

There is some altruism to it but there’s a lot of me trying to process my shit and look at it on paper and find a way to laugh about it.

char: And yet, you’re surprised that convention was full up today with people lined up to see you.

KIM: I thought we were gonna have 12 people. Because it’s first thing on Friday; I’m not a headliner. You don’t go, “Kim Rhodes and Jensen Ackles!”

char: But you’ve clearly made a connection with the women who watch the show, in particular.

KIM: And that is weird to me. It’s humbling but it’s weird to me simply because if I’m gonna be really honest I don’t feel like I have anything to offer. I just have me. And so, when people go, “Oh my God! I just have me too!”, “Oh wait a minute! I just have me too!” Everybody just starts being okay with “me”. It’s less surprising now than it would have been a year ago. But it’s startling that I don’t have people go, “Oh. You’re not who we thought was gonna be here.”

KIM: On set if someone calls me by my character name frequently it means they haven’t fuckin’ bothered to remember my name. I’m not important enough to you to look at the call sheet in your hand and call me by my name. In an environment like this [the convention] it means that somebody is so nervous and who I am matters so much to them that they get something wrong. It’s just so sweet and endearing and adorable to me. I don’t have a second of offense about it. I don’t take it in any way other than, “Oh my God. You sweet thing. I’m so sorry, ’cause you feel bad about yourself right now and I think it’s adorable.”

char: So. If for some reason Jody has disappeared off “Supernatural” or IS disappearing how do you think she should go out?

KIM: If I’m gonna be on there? I want her to lay down her life for them. [Sam and Dean Winchester]. I want her to go out on her own terms knowing that what she’s doing is for the greatest good. She’s got nothin’ left. Full on, she has nothin’ left other than fighting the good fight.

Do you watch “Primeval”?

KIM: There’s this thing where all the creepy things, all the bad guys, all those horrible eyeless monsters are in the thing and somebody has to shut the door from inside. And he goes in and he shuts the door from inside, knowing that they’re gonna eat him. But he saves them. That’s how I want her to go. I want her to go out knowing that to serve this, somebody has to die. It’s a suicide mission; and she goes out knowing, “no regrets, I’m done.”

I don’t want her, like, burning on the ceiling or turning into a demon or evil or something weird like that. 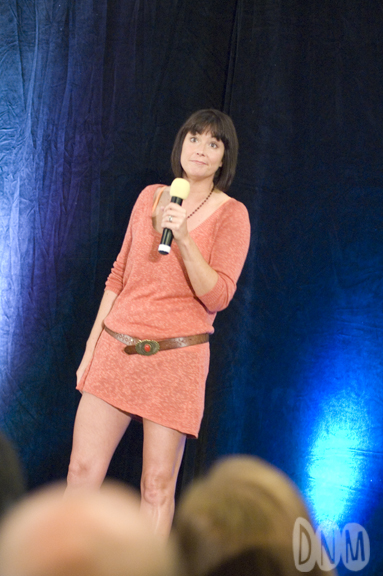 I’m pretty sure most “Supernatural” fans don’t want Sheriff Mills aflame on the ceiling. I, for one, will be keeping my fingers crossed that the Sheriff is back in season 8.

Other projects of Kim’s that are coming up?