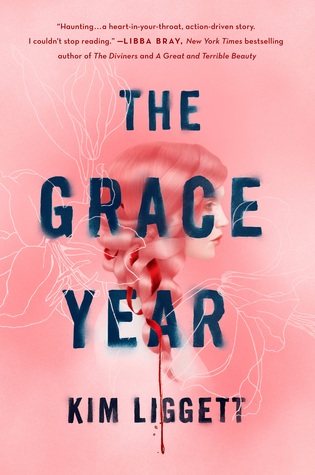 The Official Description: SURVIVE THE YEAR.

No one speaks of the grace year. It’s forbidden.

In Garner County, girls are told they have the power to lure grown men from their beds, to drive women mad with jealousy. They believe their very skin emits a powerful aphrodisiac, the potent essence of youth, of a girl on the edge of womanhood. That’s why they’re banished for their sixteenth year, to release their magic into the wild so they can return purified and ready for marriage. But not all of them will make it home alive.

Sixteen-year-old Tierney James dreams of a better life—a society that doesn’t pit friend against friend or woman against woman, but as her own grace year draws near, she quickly realizes that it’s not just the brutal elements they must fear. It’s not even the poachers in the woods, men who are waiting for a chance to grab one of the girls in order to make a fortune on the black market. Their greatest threat may very well be each other.

With sharp prose and gritty realism, The Grace Year examines the complex and sometimes twisted relationships between girls, the women they eventually become, and the difficult decisions they make in-between.

My thoughts bit:  The best way to describe this book is that it’s a mix of “The Handmaid’s Tale” and “Lord of the Flies”. At first, I thought it was a bit like The Hunger Games…but then I suppose books in this genre will always be compared to that one. Now, this book doesn’t quite match up to the glory of the first two titles…but that’s a stretch for any book. It’s definitely a solid YA/NA read that I would recommend to anyone interested in the genre.

This is a new take on a world in which women have little or no power. It’s believed that when they turn sixteen, they become magical creatures with powers that can cause havoc in the community. They are banished to live in the woods for a year. The wood is dangerous… and not all of them come back alive. Naturally, no one speaks of “the grace year” so none of the girls have any idea what happens when they leave the community.

Tierney James isn’t like the other girls she knows. Growing up she spent most of her time with her father, learning valuable survival skills. Most of the women in the community frown upon her choices…but everyone knows that once her grace year is upon her she’ll have no choice to accept the man who chooses her as a bride and then attempt to survive her year living wild like all other women.

Tierney’s friend Michael seems different. They have been friends since they were children and she feels as though he accepts her. But even Michael will take part in the “veiling” and will choose himself a girl to marry. The entire system leaves Tierney feeling sick and demoralized.

When Michael chooses Tierney as his intended…she has only moments to begin to process it before she begins her journey to her year-long banishment.

The intrigue develops quickly as the young women are force-marched into the woods. The assassins that are said to linger outside the safety of the community are there… Tierney catches glimpses of them and they lose one of their group when she strays too far. But a brief encounter with an “assassin” sows the seeds of doubt in Tierney’s mind.

When thrown together, the young women’s issues with one another intensify. There are the typical girls: the bully, the leader, the resourceful, the followers. And the breakdown of each other begins quickly. Perhaps, this book is more about the way that misogyny can come from within women. I’ve often thought that we can be our own worst enemies and the characters in this book are no exception.

There is a romance in the novel, but it’s not fully fleshed out, nor do I think it’s really necessary. I find that most YA books have a romantic aspect to them and I’m not sure it’s always helpful to the plot. I thought that Tierney was interesting enough on her own!

I received an ARC of The Grace Year by Kim Leggit from St. Martin’s Press via NetGalley in exchange for an unbiased review.