I’m not an athlete by any stretch of the imagination. I was a dancer for over twenty-five years. Then I began to have problems with my knees. By the time I was 35 I had to retire from dancing because it caused me too much pain. That’s saying something when you’re a dancer.

I have Osteo Arthritis in both knees. Basically, I have no cartiledge left. It’s painful and, quite frankly, it sucks.

Never being a “thin” girl was okay when I was dancing all the time – when I stopped dancing I began to get heavier. It’s been a long struggle.

Last year I went to see a fantastic Doctor in Vancouver. She not only understood what I was going through but she’s been there herself. One of the things she spoke about was how she got a bike and began riding.

I missed being active so I thought that sounded like a good idea. During the Holidays I bought a bike.  Thank goodness that the folks at “Spoke ‘N Motion” in Kamloops were non-judgement and awesome when I went in there for my first bike in 20 years. Ah yes, my first cycle around McArthur Island Park here in Kamloops. I only just made it, was a bit wobbly and out of breath when I got back to the car. I’m not sure if it was even a full kilometer.

Joel and I have been slowly building up my speed and strength while cycling and I’ve been feeling much better. The best part is that I no longer feel quite so “trapped”. It’s more than losing 65 lbs; it’s about the freedom I’ve managed to recapture by being out on wheels.

I can see things again. I now able to get to places I couldn’t while walking. I feel like my world has gotten a little bigger.  My friends have been incredibly supportive; some of them ride with me, some ask me about my trips, some just “like” my posts on Facebook.  It’s all support and I cherish it.

I don’t know anyone with MS – but it certainly seems like a cause I can relate to.  There are things that I’m currently unable to do because of my weight and my arthritis.  The thing is – it’s a struggle – but I can lose weight and eventually I hope to have both knees replaced.

There is currently no cure for Multiple Sclerosis.  Because I was finally able to ride 28 km; I rode for the folks who couldn’t.  My mom and dad were there at the finish line, my husband right behind me.  It was a huge milestone for me – and everyone in my family.  It’s a beginning.

Next year? We ride 40 km. Or maybe we don’t – maybe we’ll by cycling on a trip somewhere near the Grand Canyon.  The thing is – now – I have some options. It’s a nice feeling. 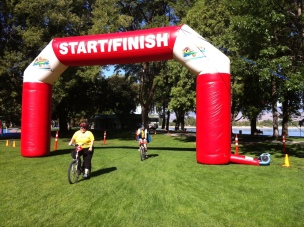 For more information about

MS or the Ride – go here

One thought on “Riding For MS & For Me”